Thank you for notifying the Web Team of the issue(s) with this page. We will respond as quickly as possible.
John Deaver Drinko Academy
About Us
Donate
Program Support and Development
Special Events and Awards
Scholarship and Creative Production
2020 Activities
Quoits
Rules of Quoits 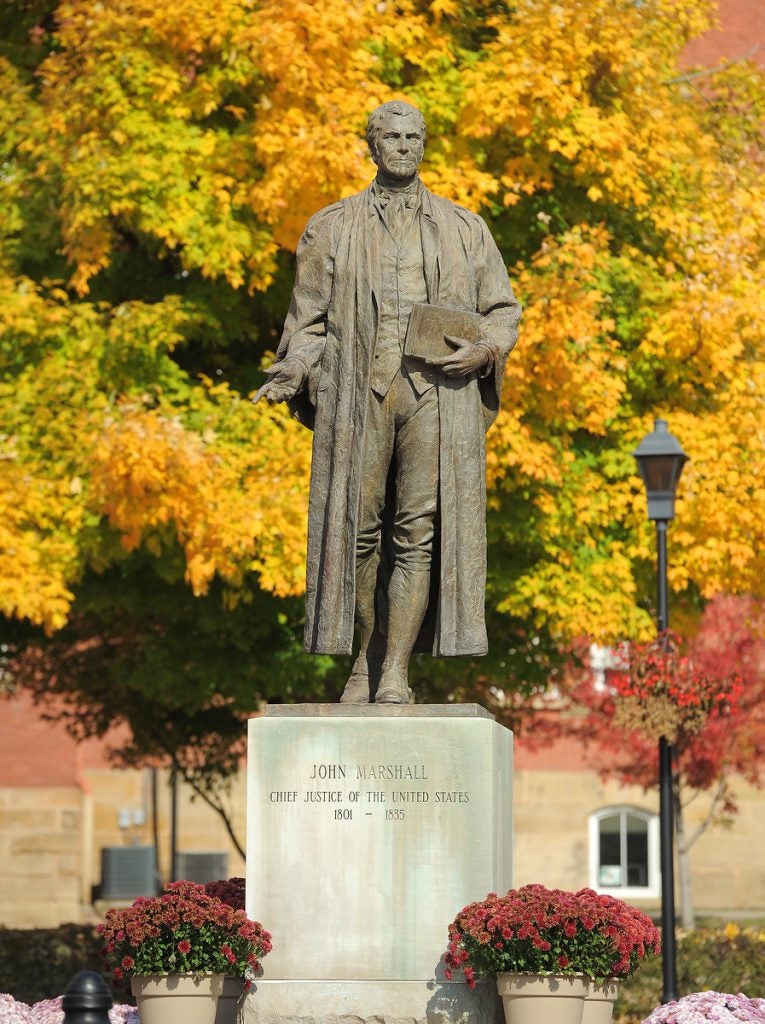 Named For: John Marshall, Chief Justice of the United States.

Description: 8-foot tall bronze statue, designed by William Behrends of Tryon, N. C. Inscribed: “John Marshall, Chief Justice of the United States 1801-1835.” This statue with its circular area, defines a network of radiated pedestrian paths through the inner campus. The 6-foot base is engraved: “Revolutionary soldier. Definer of the Constitution. Devoted husband and father.”

Known as The Great Chief Justice, John Marshall was instrumental in assuring America’s acceptance of the judiciary as the third branch of the federal government and establishing its power to strike down laws whose language is in conflict with the Constitution. As Chief Justice, John Marshall embodied the majesty of the Judicial Branch as fully as the President of the United States represents the power of the Executive Branch. Yet, to countless Americans, and those beyond our borders, he is largely unknown.

Before John Marshall became Chief Justice, he was a hero of the American Revolution, a skilled practitioner of the law, a respected member of the General Assembly of Virginia, an outstanding delegate to the Virginia Ratifying Convention of 1788, a successful diplomatic envoy to France, a capable member of the Congress of the United States, and a distinguished Secretary of State in the cabinet of President John Adams. All this experience amply befitted him for the tremendous task that confronted him when he became Chief Justice in 1801.

At that time in history the Constitution of the United States did not enjoy the public reverence it is accorded today. Nor did the Supreme Court of the United States enjoy the public esteem in which it is now held. In thirty-four years as Chief Justice and through more than 1,000 opinions, John Marshall made the Constitution the supreme law of the land and his court the final, independent arbiter of that law. Through his words and under his leadership, the Supreme Court became a third and equal branch of our government. He gave the Constitution and the three-branch system of government it created the strength to endure for all time.

Find out more about John Marshall

The desire to erect a life-size statue of John Marshall on campus became a reality with the construction of the John Deaver Drinko Library.  Plans called for the development of a plaza or commons area adjacent to the Library and funds for the project came from a grant provided by Ashland Oil, Inc.

The Drinko Academy, among other entities, argued that the construction offered a clear opportunity to erect a statue which would enhance the profile of our namesake on campus.

President J. Wade Gilley responded positively to the idea and created a Public Art Committee for the Drinko Library.  One charge given the committee was to select a sculptor for a life-size statue of the Great Chief Justice to be located in the newly named “Ashland Commons” adjacent to the new Drinko Library.  The artist selected was the noted American sculptor William Behrends of Tryon, North Carolina.

I wondered if Mr. Scott might still be living and, if so, might he be willing to participate in our unveiling.  Following an intense search, I found that Mr. Scott was living in Bowie, Maryland.  I contacted him and, during the conversation, he told me that his daughter, Mary Ann Scott, then seven years of age, unveiled a second bust of John Marshall.  Sadly, sometime during Easter vacation in 1957, the original granite bust had been defaced by vandals. Thus, in 1959 Ms. Scott unveiled the bronze bust designed and executed by our own Professor Joseph Jablonski which stands today in place of the earlier Fleisch monument.

Mr. Scott went on to relate that he had an eleven year old grandson and when I asked if he might participate in the unveiling, Mr. Scott responded in the affirmative.  As a result, Andrew Marshall Schiff, son of Mary Ann (Scott) Schiff and grandson of Charles Marshall Scott unveiled the statue during the ceremony held on the Ashland Plaza, at 2:00 p.m., October 23, 1998.  Charles Scott and his wife and Mary Ann Schiff and her husband were in attendance for the unveiling of the statue by the great, great, great, great grandson of John Marshall!

Another interesting aspect of the unveiling ceremony was the participation in the event by leading dignitaries of the Cherokee Nation.  Again, in Moffat’s history of Marshall, he relates that when news of the vandalizing of the Fleisch bust was reported nation-wide by the Associated Press, then Marshall President Stewart H. Smith received a letter of sympathy from Alaquah, Chief of the Cherokee Nation.  The reason for the Chief’s remorse stemmed from John Marshall’s strong defense of Cherokee rights and possessions during the Andrew Jackson Administration.

Subsequently,   I contacted Mr. Joe Byrd, then Principal Chief of the Cherokee Nation located at Tahlequah, Oklahoma and explained to him the planned unveiling and the letter from Chief Alaquah written in 1957.  Chief Byrd said his People knew and loved John Marshall and would be honored and proud to participate in the ceremony.  True to his word, Chief Joe Byrd along with other Cherokee dignitaries flew from Oklahoma in their Lear Jet and participated in the program.  Chief Byrd not only extolled the virtues of John Marshall but also presented the university with the impressive Great Seal of the Cherokee Nation.  As the chief explained, the presentation of the seal was made only on very special occasions and bestowed upon only select individuals and institutions.  The Great Seal now proudly adorns a wall in the office of the Drinko Academy.