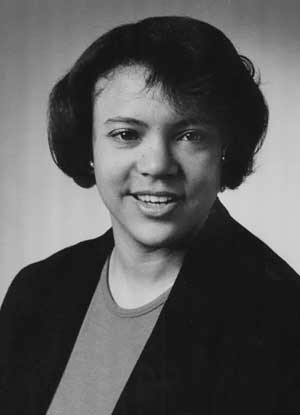 Associated with The New York Times since 1983, Angela Dodson began her newspaper, magazine and book editing career as an intern at the Charleston Gazette. The 1973 graduate of Marshall’s School of Journalism and Mass Communications accepted a full-time position with the Huntington Advertiser, and went on to serve as a news correspondent in the Washington, D.C. bureau for the Advertiser’s parent company, Gannett. In 1979 Dodson received her M.A. degree in journalism and public affairs from American University. She worked for the Rochester Times Union, for the Washington Star, and for the Louisville Courier Journal, and in l983 she moved on to the New York Times as a copy editor on the national desk. She was promoted to editor for the Living section and head of the Style Department. In 1992 she became the first African American woman to serve as a senior editor at the New York Times. Dodson left the Times in 1995, but she continued writing and editing for a variety of publications including Essence, DIVERSE: Issues in Higher Education and Black Issues Book Review, of which she became executive editor in 2003. Dodson formed Editorsoncall LLC, a service that connects clients to editors, writers, photographers, graphic artists and consultants, in 2012. She is the host of an award-winning radio program Black Catholics, Yes!, she taught writing and editing for multiple organizations including  the National Black Writers Conference, the National Association of Black Journalists, the American Press Institute, the American Society of Newspaper Editors and the Maynard Institute. She is also a past secretary of the National Association of Black Journalists. Dodson was named a Distinguished Alumna in the School of Journalism at Marshall in 1988, she received a Black Achiever in Industry ward from the Harlem YMCA in 1990, she was honored as the Black Alumna of the Year at Marshall University in 1998, and in 2000 she received the Feature Writing Award from the New York Association of Black Journalists. Her book, Remember the Ladies: Celebrating Those Who Fought for Freedom at the Ballot Box, highlighting women’s impact on U.S. politics was published in 2017.