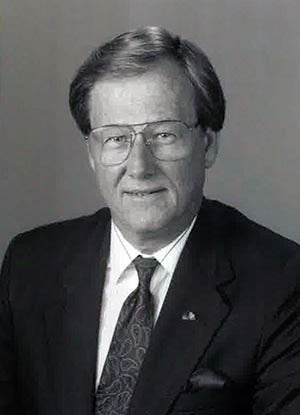 Smith, a Huntington native, graduated from Marshall with an A.B. in speech and journalism in 1961, the same year Marshall became a university. Upon completing his Army service in 1963, Smith began his 35-year broadcast career at WVOW Radio in Logan, WV.  He moved to Huntington in 1967 where he worked as a staff announcer, weather forecaster, news reporter, news director, assignment editor and news anchor for WHTN-TV, Channel 13, (now WOWK-TV). In 1986 Smith moved to WSAZ-TV as co-anchor of the evening news and, later, as news director. He retired from WSAZ-TV in 1996.

In 2009 Smith was hired as Director of the Lawrence County Chamber of Commerce, expanding its membership and introducing social events. Smith became the spokesperson for Advantage Toyota in Barboursville in 2013, a connection that started with his work at WVOW. Smith has taught at Ohio University Southern and led a $5 million fundraising campaign as its director of development. Although Smith’s active military duty ended in 1963, he continued in the reserves for 26 years, retiring as a lieutenant colonel in 1988.

Bob is the recipient of the United States Army Meritorious Service Medal, he has been elected to the West Virginia Broadcasting/Radio Museum Hall of Fame and received the Leadership Tri-State Community Service Award. He is past president and vice president of the Chesapeake, Proctorville, Rome Lions Club, past member of the Ironton Rotary Club and of the East Lawrence Kiwanis Club. He was an original board member and volunteer for Faith in Action. He is also a member of the Generations Quartet.