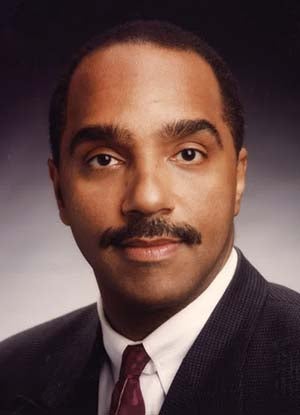 Joe Johns is a 1980 graduate of Marshall’s political science program with minors in speech broadcast, theater and English. He attended Marshall on a track and field scholarship (shot put and discus), and he was inducted into the Marshall University Athletics Hall of Fame in 2003. He also earned a law degree from American University.

Johns credits Bos Johnson, a journalism professor, and Dr. Dorothy Johnson, chairwoman and professor in speech and broadcasting, for his career in broadcasting. He became a WSAZ reporter in 1980, moved to WXOC in Charlotte the next year and to WRC in Washington in 1983. At WRC he was selected as one of the best Washington local reporters. He won a Washington Emmy for a piece on the Nation of Islam’s controversial efforts to rid a dangerous neighborhood of drugs. In the mid 90s he joined NBC where he became a fixture on network television news in the 1990s as a Capitol Hill correspondent. His usual post was the House of Representatives, but he also covered the impeachment of former president Bill Clinton, the U. S. Supreme Court, Tom Delay’s first indictment, the Sago mine disaster and he was part of the NBC nightly news team that won an Edward R. Murrow Award for its “Beltway Sniper” coverage. Johns’ reports have been seen on the “Today” show, “Weekend Nightly News” and other NBC news programs, as well as cable television on MSNBC and the internet on MSNBC.com. He traveled with Hillary Rodham Clinton on a seven-nation tour to central Europe in 1996, and accompanied President Clinton on his historic tour of Africa in 1998.

Johns joined CNN as a congressional correspondent in 2004 and he was named CNN senior Washington correspondent in January 2014. His legal expertise aided in coverage of the Affordable Care Act. In 2011 his reporting contributed to Emmy Awards for Anderson Cooper 360°’s Haiti earthquake coverage. He received two National Association of Black Journalists Salute to Excellence for stories about environmental injustice and for his coverage of a lynching survivor. He contributed to Emmy Award winning election night coverage in 2012 and 2006. He was a member of the Peabody Award-winning Best Political Team on Television throughout the America Votes 2008 election coverage and he has reported for and narrated CNN documentaries on the 2001 anthrax mailings and on allegations of voter suppression and fraud.