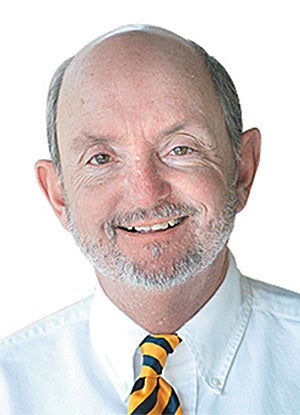 After a short stint at The Herald-Dispatch, Hackworth spent 15 years with The Ashland Daily Independent. The Huntington native moved to The Sun Times in Myrtle Beach, South Carolina, and later the Sun newspapers in Charlotte County, Florida. He is now the editor of the Sun newspapers, former editorial page editor and he has a position on the Sun’s editorial board.

Hackworth claimed not to enter a lot of writing competitions, but he has claimed first place nearly every time he has entered. He won Best Sports Column from the Kentucky Press Association, First Place for Opinion Writing twice from the Florida Press Club, First Place in Editorial Writing from The Society of Professional Journalists, from Carmage Walls, and from the Florida Society of Newspaper Editors. FSNE also awarded Hackworth a First Place for Column Writing.

In 2016, Hackworth won the Pulitzer Prize for a series of editorials he and Brin Gleason wrote about the beating death of an inmate at the Charlotte Correctional Institution. The Pulitzer Prize Board awarded the prize to Hackworth “for fierce, indignant editorials that demanded truth and change after the deadly assault of an inmate by corrections officers.” They said his editorials “fanned the flames with locals who were stunned by the apparent lack of concern by authorities over this brutal death.”