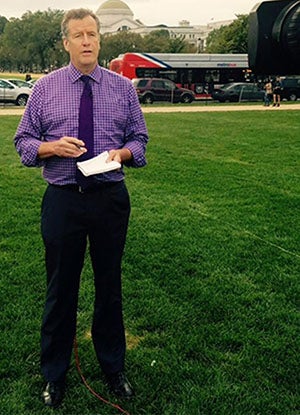 An Emmy-award winner, Callebs spent more than 20 years as a CNN correspondent before moving to CCTV. He graduated from Marshall with a Bachelor of Arts in journalism and spent several years covering local stories for WSAZ in Huntington, WV. In 1985, he was hired by WIS in Columbia, South Carolina and in 1989 he signed on with CNN. He moved from writer to environmental reporter, and, then, was tapped to work at CNN Financial News where he worked at times with Lou Dobbs. Callebs covered the financial beat for about two years before returning to CNN Newsource.

During his time with CNN and CNN Headline News, Callebs covered a litany of notable stories. He reported from Hurricane Katrina and from Ground Zero following the Sept. 11 terrorist attacks. A former diplomat in 2011 to Afghanistan, Callebs helped rebuild the television, radio, and film industries in the war-torn country. He arranged for an exclusive interview with Hamid Karzai, the president of Afghanistan, which concluded with Karzai presenting Callebs with a hat from his personal collection. He also landed an exclusive interview with Michael Fortier, a coconspirator in the Alfred P. Murrah Federal Building bombing in Oklahoma City.

Callebs reported his experiences living on food stamps for a month and won recognition for shedding light on issues of poverty and food insecurity. Closer to home, Callebs’ documentaries have focused on the Huntington heroin epidemic and the success of Blenko Glass.

In addition to winning numerous awards for his spot news reporting, Callebs was awarded an Emmy in 1993 for his coverage of midwestern floods, and he received a gold medal at the New York Film Festival for his work on “Earth Matters,” a special program about the after effects of the Exxon Valez oil spill in Alaska.

In April of 2004, Callebs was awarded Marshall’s Distinguished Alumni Award.

He still writes his own copy.