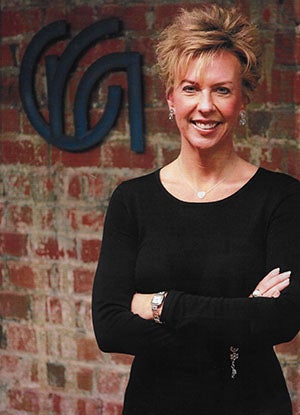 Lavenski is the CEO and co-owner of Charles Ryan Associates, one of the largest communications firms in the region.

The Lewisburg native received a degree in journalism with a concentration in public relations followed with a master’s degree in political science. Her career started in the non-profit world when she served as the development director at the Children’s Treatment Center in Clarksburg. In 1995 she joined Charles Ryan Associates.

Lavenski started with CRA as a senior account executive and was promoted to vice president a year later. She continued to move through the positions of senior vice president and a member of the executive management team, managing partner and in 2014 she purchased the company. In addition to the main Charleston, WV, location, CRA has offices in Richmond, Virginia, Columbus, Ohio and Philadelphia, Pennsylvania

During her two decades with the company, Lavenski has worked with everything from Fortune 500 companies to local public figures. Her work has garnered numerous awards and praise throughout the years, both nationwide and internationally. Her litany of awards is extensive.

Lavenski was honored with The State Journal’s 40 Under 40 Award in 2009 followed with West Virginia Executive’s Young Guns Award in 2010. In 2014 she was featured in WV Focus’s Fall 2014 “Wonder Women” Issue, recognizing some of the state’s powerful women who are breaking the status quo and demonstrating that leadership has no gender. WV Executive Magazine again recognized Lavenski again in 2015 when it named her with a Young Guns Reloaded Award in 2015. In that same year, she was named Practitioner of the Year by the Public Relations Society of America, WV Chapter.

Gazette-Mail writer, Sandy Wells, in 2016 featured Lavenski in her “Innerviews” series, and in 2019 Lavenski was named one of Industry Era magazine’s 2019 Best Entrepreneurs of the Year.” She also served as Marshall University’s commencement speaker in 2019. She is listed among “Who’s Who in West Virginia Business.”

Outside of her CRA obligations, Lavenski serves on or has served on a number of boards and committees including the Board of Directors of the WV Chamber of Commerce, the WV Roundtable, the West Virginia Chamber of Commerce, Thomas Memorial Hospital and Thomas Health Systems, chairwoman for the WV Manufacturers Association, subcommittee chairwoman for the Charleston Area Alliance’s “2030 Innovation/R&D Committee,”  chairwoman for the Energy Speaks Education Initiative, committee member for the annual Marcellus & Manufacturing Development Conference, CRA’s representative to the West Virginia Business and Industry Council and a member of the Advisory Council for Marshall University’s School of Journalism and Mass Communications.