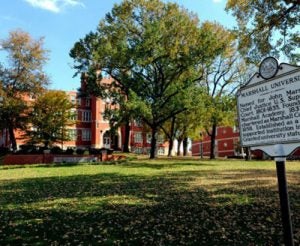 “I’m pleased at Governor Justice’s announcement today that he will veto the budget bill. That budget would have been devastating for Marshall University and higher education in our state.

“If that budget had gone into effect, Marshall’s state funding would have been reduced by an estimated $8.3 million—in addition to the $11.5 million in state cuts we have had since 2013. Additional sizeable cuts would simply be bad for students, bad for parents, bad for the Marshall community and bad for our state’s economy.

“Seventy-five percent of our students are West Virginians. A decrease of $8.3 million to our state appropriation would have forced us to raise tuition by about 14 percent, meaning that an in-state, undergraduate student at Marshall would have had to pay an additional $1,000 per year for their education. This major increase would make college affordability a reach for some of our students and make graduation all that harder for others.

“Significant cuts would have forced us to consider major restructuring of our programs and academic units, and to look at the possibility of layoffs of faculty and staff, having already eliminated 16 percent of our staff and administrative positions through attrition to deal with the budget cuts over the past few years. All these things would negatively impact the quality of the education and services we can offer our students.

“Our medical school provides critical medical care to people across the region and the proposed budget would have strained those services. In addition, Marshall University is a national leader in the fight against substance abuse—a fight that our state cannot afford to lose—and our efforts in that arena would have been hampered by severe cuts to our funding.

“Marshall University’s estimated economic impact is $400 million and our university supports more than 3,000 jobs. These budget reductions would have decreased that impact and derailed valuable partnerships with industries and communities, hindering economic growth and job expansion.

“We have done the same thing year after year—cuts, cuts and more cuts. Now is the time for a different plan. We urge everyone to come to the table and reach a responsible compromise so our state’s citizens and future generations will not be left behind.

“I appreciate the governor’s leadership on this issue, and look forward to working with him and the legislature on a plan that works for everyone.”