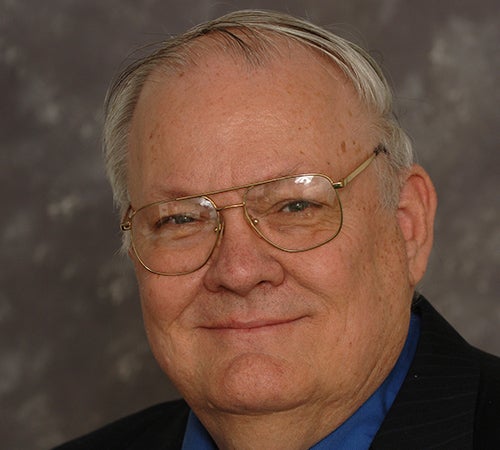 Professor Emeritus Dr. Gary D. Anderson of Marshall University’s Department of Chemistry was named a Fellow with the American Chemical Society and will be recognized at the society’s fall national meeting in San Diego in August. The ACS Fellows program honors members for outstanding achievements in and contributions to science, the profession and the society.

Anderson, who was one of 70 Fellows honored this year, retired from Marshall University in 2008 after 27 years in the chemistry department.

He received his B.S. in Chemistry and his M.S. from the University of Oklahoma. His thesis project involved the study of the influence of steric factors on the nitration of substituted biphenyls. He obtained his Ph.D. at Florida State University, where he worked with Professor Werner Herz on the chemistry of natural products and X-ray crystallography.

Anderson’s service contributions “have been amazing in terms of amount, quality and impact, both locally and nationally,” said Dr. Michael Castellani, chair of the Department of Chemistry. “He has also made a major contribution to education at Marshall through his early development of e-courses and his service to the committees that created the rules for development and approval of those courses.”

At Marshall, Anderson won the Distinguished Service Award in 2007.

“He has been a major force in Alpha Chi Sigma, the chemistry professional fraternity, and has held every major elective office, including president. In 2016, he won the most important service award, the John R. Kuebler Award,” Castellani said.

Anderson has been involved in a number of other chemistry-related organizations throughout his career and has been active in the American Chemical Society since the 1970s. He was a local representative and served as a councilor in the national American Chemical Society for more than 20 years, and has served on several ACS committees and chaired a number of its subcommittees, Castellani said.

The society was established in 1876 by U.S. Congress and is among the world’s leading scientific societies. According to its website, its mission is “to advance the broader chemistry enterprise and its practitioners for the benefit of Earth and its people. Our vision is to improve people’s lives through the transforming power of chemistry.”