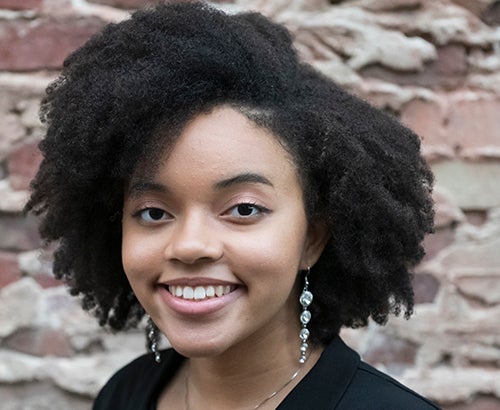 Morgan Johnson is a rising sophomore, mechanical engineering student, and a member of both the Society of Yeager Scholars and the Society of Black Scholars. This summer she’s working for Northrop Grumman as an aeronautics systems engineer intern.

That native of Martinsburg, West Virginia, is handling projects for Northrop Grumman from her own home during her paid internship. Although she can’t talk about the specific projects she’s been involved in, Johnson says the internship has been invaluable.

“There are a variety of really awesome projects that I’ve been able to learn about,” Johnson said. “So far I’ve aided in making testing plans and in developing designs. I’m about halfway through my internship and I’ve had the opportunity to work on two difficult, awesome projects.”

As a member of the Marshall University Louis Stokes Alliance for Minority Participation program (LSAMP), Johnson was able to attend the Black Engineers of the Year Conference (BEYA) in Washington, D.C., in February. That led to a connection with Northrop Grumman and an interview. The interview went so well that later that day a job offer came for a summer intern position for Northrop Grumman’s Space Park facility in California. She says it’s been a great experience.

“Despite only going into my sophomore year at Marshall in mechanical engineering, I feel very welcomed and encouraged in the Northrop Grumman workplace,” Johnson said. “Taking on projects that contain material that I have not yet learned in school has been overwhelmingly fulfilling.”

Maurice Cooley is the vice president for student affairs and intercultural affairs, and the principal investigator for the LSAMP program at Marshall University.

“Morgan is among the most intellectually prepared, ambitious and culturally balanced students I’ve had the opportunity to know over the past 18 years,” Cooley said.

“Morgan is the perfect example of a student who benefits from the support we at Marshall provide our students,” Bailey said. “She is a special student and with the backing of these programs she’ll be elevated to a national level.”

Johnson says at times it’s been difficult, but whenever she’s needed help, others at Northrop Grumman have provided help and clarification on the projects.

She says by the end of the three-month internship she’ll have earned job experiences that are invaluable to someone this early in their college career.