Fifty years after the worst tragedy in American sports history, university officials plan to commemorate the event and renew the school’s pledge to never forget those lost on that rainy November night.

On Nov. 12, 1972, just two days before the second anniversary of the Marshall plane crash, a Memorial Fountain was installed and dedicated in the heart of the university’s Huntington campus. The tulip-shaped sculpture, designed by world-renowned Italian artist Harry Bertoia, was intended to reaffirm “purposeful life” as much as mourn “tragic loss” following the deaths of the 75 football players, coaches and boosters who died in the tragic crash of Nov. 14, 1970. A plaque at the base of the fountain reads: “They shall live on in the hearts of their families and friends forever and this memorial records their loss to the university and the community.”

Every year on Nov. 14, the Marshall family gathers around the fountain to honor those lost and this year will be no exception. In fact, this year marks the 50th anniversary of the plane crash and university officials are hard at work planning events to commemorate the milestone. A special committee has been meeting since January and is made up of representatives from the Alumni Association, Student Affairs, Student Government Association, Athletics, the Office of the President, University Communications, Operations and others.

“I think what has impressed me most is the dedication and care every member of the committee has demonstrated in the planning process,” said Ginny Painter, senior vice president for communications and marketing. “Most of the people involved in the planning were not even born yet when the tragedy occurred, so what they know about it is what they’ve heard second, third or fourth hand. And still, they have an absolute commitment to doing it right.”

Some of the plans to date include the commemorative logo to mark the occasion and a special website with information about the schedule of events which is now live at www.marshall.edu/neverforget. The website also includes links to recordings of previous fountain ceremonies, archival photographs and news clippings. There is also an opportunity on the site for people to “Share a Memory.” 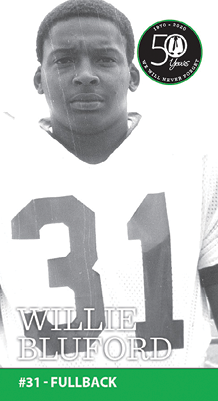 Large banners featuring the names and photos of the 75 individuals lost in the plane crash are being placed around campus, and will remain up through at least the spring semester. Megan Archer from the Office of University Communications has taken the banner project to heart, spending countless hours trying to track down high-quality photos of the crash victims from newspaper archives or by contacting family members directly.

“I feel a real sense of ownership and a responsibility to those who perished, to ensure they are remembered and are honored appropriately,” Archer explained.

Also, plans have been made to relocate the Marshall Football Memorial sculpture by Vernon Howell that for years overlooked Fifth Avenue on fraternity row. It will be rededicated in a special ceremony on Nov. 10 at 10 a.m. at its new location between the Rec Center and Sorrell Maintenance Building, just off 20th Street.

Goldenseal, the magazine of West Virginia traditional life, will feature a cover story about the 50th anniversary of the plane crash in its fall edition. President Jerome Gilbert has written a column for the magazine about what Nov. 14 means to the Marshall and Huntington communities. In addition, The Herald-Dispatch has plans for weeklong coverage of the anniversary, including a special glossy publication that readers can purchase.

The Huntington Museum of Art is planning a retrospective of Marshall Memorial Fountain sculptor Harry Bertoia to coincide with the anniversary.

This year’s fountain ceremony will take place at 9 a.m., followed by the Marshall vs. Middle Tennessee football game at noon. Lucianne Kautz Call, the daughter of MU Athletic Director Charles Kautz, who perished in the place crash, will be the featured speaker. University officials are making plans for the ceremony to be attended by the public, but due to concerns about the coronavirus epidemic they also are considering a virtual-only option.

“It’s been challenging to plan something like this in the time of COVID-19,” said Painter. “Many of the initial ideas we had aren’t going to be possible due to likely restrictions on traveling and gatherings. However, it’s certainly been a labor of love for everyone and we look forward to honoring our 75.”

About the author: Jack Houvouras is a 1988 graduate of the Marshall University School of Journalism and the publisher of Marshall Magazine.

Photos: (Top) The university’s signature Memorial Fountain on a misty evening.  (Second from top) Just one of the many things Marshall University officials are doing to mark the 50th anniversary is placing large banners around the campus that feature the names and photos of the 75 individuals lost in the plane crash.