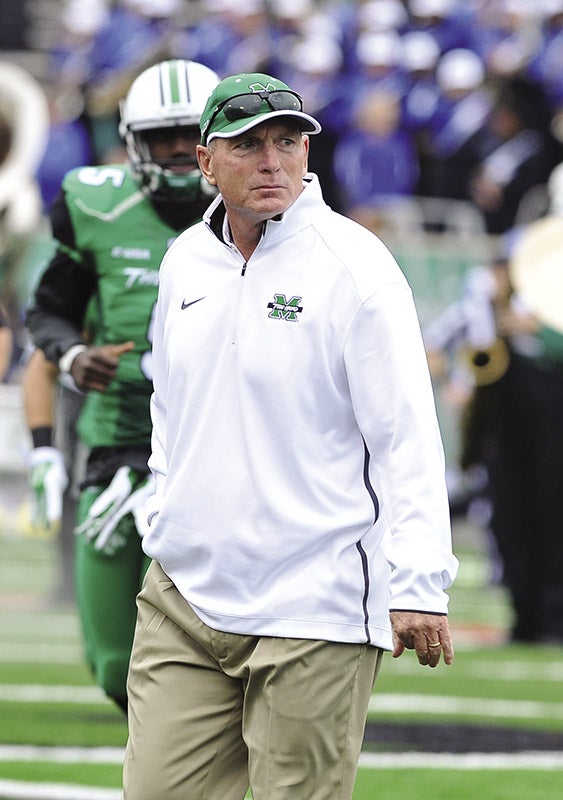 Not satisfied with the Herd’s 10-3 record last season, Coach Doc Holliday says greatness can only be measured by one thing–winning a conference championship.

If Kroger ever wanted to abdicate its sponsorship of Marshall’s Green and White Game, maybe The Travelers Companies and its ubiquitous umbrella logo would be the most logical corporate sponsor to step in. There’s been no other Herd sporting event more in need of umbrellas than this annual end-of-spring football game. Almost on command, the rains have come during the Green and White game for six of Doc Holliday’s seven spring games. The Herd was able to stay outdoors for the game portion of the final edition of spring practice. Immediately after the game, however, fans, players, coaches and media headed to the Chris Cline Athletic Complex for interviews and autographs. Holliday seemed to be joking when it was suggested to move the game indoors.

“I think it seats 500 to 1,000,” Holliday said of the seating capacity of the indoor practice field. “Triple the tickets and we’ll be all right, it’s seven straight years it’s rained.”

Even amid the raindrops there was not much gloom and doom after the game. Marshall’s offense came out firing on its first drive with the football version of a back shoulder alley-oop from Chase Litton to the Herd’s tallest wide receiver, Michael Clark. Clark and Litton played basketball together growing up in Tampa, and Clark played collegiately at St. Francis. Litton convinced him to give football a try. “It’s just exciting,” Clark said after catching the touchdown pass from Litton. “I can’t wait to play in the fall. Me and Chase have a thing. We just look at each other. We’re basically best friends playing football.”

He’s hard to miss, and, his teammates hope, harder to guard.

“That’s a 6-foot-7 weapon we just added to our roster,” fellow receiver Deontay McManus said of Clark’s arrival. “Mike’s just coming off of basketball and it just took him awhile.”

Marshall’s plugging in several new names and numbers to a defense that lost such stars as Conference USA Defensive Player of the Year Evan McKelvy, linebacker D.J. Hunter, and cornerbacks Corey Tindal and Keith Baxter. Linebacker Frankie Hernandez won the defensive player of the spring award, though Holliday said it was a tough call.

“Chris Jackson (cornerback) was probably in the conversation for player of the year in the spring on defense,” Holliday said. “Frankie Hernandez (linebacker) has been tremendous. There’s also Davon Durant (linebacker). Those three inside defensive linemen — probably any of them could have won that award, too. I thought the defense, a lot of those young guys, really came along.” 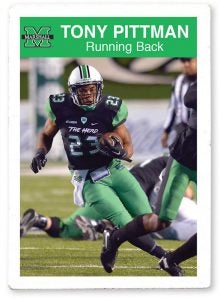 Marshall’s offense practiced most of the spring with a patchwork offensive line. Senior Clint Van Horn doesn’t need to audition and he served as a player/coach during the spring. Since he’s been granted a sixth year of eligibility, he’ll serve as the elder statesmen and leader of that group along with center Michael Selby. With quarterback Chase Litton returning, he’ll command an offense that would like to improve on its 168 yards rushing yards per game last season. Hyleck Foster, Tony Pittman, Keion Davis and Delvin Weems should all help carry the load. Even if he’s hesitant to say it, this is the quarterback’s offense.

Summer will be anything but a breeze for the Herd’s players and coaches. Conditioning and individual workouts are not optional in a locker room where the players know hard work breeds success. 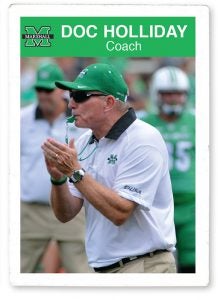 “We can be great,” defensive tackle Nyquan Harris said. “Hard work and effort; we’ve got the talent. Even on off days we should be doing something.”

This program has been polishing its pedigree in the Doc Holliday era. The Herd is the only team in the Group of 5 conferences to register double digit wins in the past three seasons. Marshall’s won five straight bowl games. And the Herd’s 10-3 all-time bowl record is the best among major college football programs to have played at least 10 bowl games. But if you ask Doc Holliday what constitutes a great season, he has his benchmarks.

“Some people say you had a great year last year,” Holliday said. “No, we didn’t have a great year last year. We had a good year because we didn’t win a championship. The term ‘great’ should be reserved for the years you win a conference championship and that’s what it’s all about. That will always be the goal here. We’re going to work our tails off to make that come true.” Marshall’s schedule starts a week later than most FBS programs with its opener against Morgan State Sept. 10. Then it’s 11 straight weeks of football without an open week. In a two-game stretch that will be a supreme test, the Herd hosts likely preseason top 25 team Louisville and the next week travels to University of Pittsburgh. It’s a seven home-game schedule, which includes east division rivals Middle Tennessee and Western Kentucky coming to Joan C. Edwards Stadium.

Fall will come soon enough. The most pressing concern for Marshall’s players is to think about the season every day prior to the season. The players are saying all the right things.

“One practice, one day,” is McManus’ credo. “We’ve got some tough teams on our schedule, but we’re not really worrying about them, we’re worrying about us and making what we do gel and come together. By the time we face those teams we should be good.”

Blue-sky expectations for sure.

Keith Morehouse is the sports director for WSAZ NewsChannel 3 in Huntington.

Photos: (Top) Doc Holliday is looking for a conference championship this year. (Second from top) Quarterback Chase Litton (left) will lead the Thundering Herd in its 2016 season. Defensive tackle Nyquan Harris is on the right.