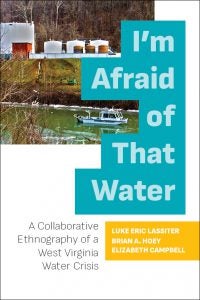 Part I. “I’m Afraid of That Water”: A West Virginia Disaster and Water Crisis

The book also includes several photographs by 2016 MA grad Wes Kuemmel, who, after completing his degree, and with his daughters in college, moved from West Virginia along with wife Caitlin, to a small farm in Ohio.

Book and Angie Rosser (author of Afterword) featured on C-SPAN