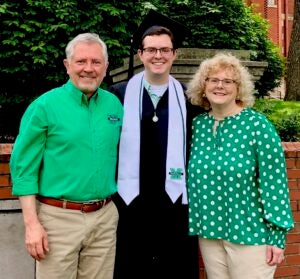 The endowment is named in honor of Otto “Swede” Gullickson, who served as a physical education professor and the director of intramurals at Marshall from 1930 until his retirement in 1963. During his tenure at Marshall, Gullickson developed the most extensive college intramural program in the nation. He served as Marshall’s track and field coach and cross-country coach from 1947 until 1952. Gullickson was an infamous fixture at campus pep rallies, leading the cheers for many decades. Gullickson also founded the Marshall chapters of Alpha Phi Omega and Sigma Alpha Epsilon. Gullickson Hall on the Marshall campus was named in his honor in 1964.

Gullickson also trained military cadets on the Marshall campus during World War II. He was awarded the Medal of Freedom by Gen. Douglas MacArthur for his work with the American Red Cross in Asia following World War II.

“My grandfather, Professor Otto ‘Swede’ Gullickson, loved this university and was an institution on the Marshall campus for many decades,“ Dianna Canfield said. “Creating the Gullickson Family Endowment was the perfect way to honor his legacy. As the parents of a recent Yeager Scholar, we appreciate the value of the program and wanted to support future Yeager Scholars.”

Proceeds from the Gullickson Family Endowment will directly benefit the activities of the Yeager Scholars program in the Marshall Honors College.