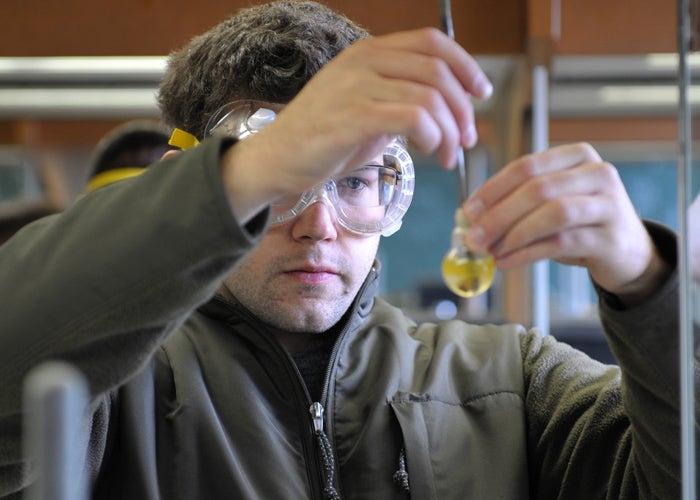 Allied recently made a $150,000 donation to support the Marshall Institute for Interdisciplinary Research (MIIR) and the university’s College of Fine Arts. The $100,000 portion of the gift designated for research at MIIR, in addition to other year-end gifts and pledges, is expected to be matched by the state’s trust fund and will allow Marshall to draw down the last of the money allocated to it in the fund.

The West Virginia Legislature created the trust fund, which is also referred to as the "Bucks for Brains" program, in 2008 with an initial appropriation of $15 million for Marshall and $35 million for West Virginia University. Over the past five years, the universities have been able to tap into the fund to double private gifts that support research initiatives linked to economic development, health care and job growth. With this latest Allied contribution, Marshall has raised its maximum of $15 million in private donations, which, with the match from the trust fund, will result in a $30 million benefit to the university. The program has led to the creation of 16 new research endowments at Marshall and will increase the university’s overall endowment by more than 15 percent.

"It is entirely fitting that Allied Realty Company made the donation that brings us to our goal," said Marshall President Stephen J. Kopp. "Allied was the first private donor to step forward when the trust fund program was established, and they have been supporting research at Marshall with generous donations ever since. The Polan family and their company are community leaders in every sense. We are fortunate to have their commitment to advancing local and regional economic development through research."

He continued, "On behalf of the entire Marshall community, I extend a hearty thank you to all the donors who have made it possible for us to reach this milestone. Their contributions will help ensure funding for research that will advance new discoveries and promote economic development far into the future.

"I also want to express deep gratitude to our state’s leaders, including members of the state legislature and officials at the West Virginia Higher Education Policy Commission, who had the foresight to support the ‘Bucks for Brains’ concept. We hope the success we have had will encourage continued support and reinvestment in this program."

Allied Realty Company President Rebecca Polan said MIIR’s role of conducting commercially viable bioscience research at the university and facilitating partnerships with outside companies is vital to the future of Huntington and the entire region.

She added, "We are pleased to support organizations that serve Huntington, the state and region. Marshall University makes the Huntington community an excellent place to live, learn and work."

Lake Polan, Allied’s chairman of the board and CEO, said, "By helping Marshall University expand its presence as a leading research institute, we are helping our community leverage itself into the knowledge economy."

Dr. Ron Area, Marshall University Foundation CEO, said Allied and other donors like the research trust fund program because they can essentially double their gifts, while making a lasting impact through endowments.

He said, "Hats off to Allied Realty for this most recent generous gift and for serving as pioneers in the trust fund program. They have helped us show others what a wonderful incentive the trust fund is. Donors like being able to maximize their contributions and, because their gifts are doubled and endowed through this program, they know they will be helping students, faculty and the community for generations. We have gained a good deal of momentum over the past year, and have additional qualifying donations and pledges ready to match if the state allocates more money for the trust fund."

Dr. John Maher, Marshall vice president for research, added, "The proceeds from these endowments are already impacting research programs across the university—from science to engineering to medicine. Thank you to the donors and the state leaders who helped establish the research trust fund. We look forward to watching these research and economic development initiatives grow and prosper over the coming years."

Allied Realty Company is the corporate hub for a full-service global logistics business with more than 2.5 million square feet of commercial, manufacturing and distribution holdings in downtown Huntington, Kenova, Nitro and Parkersburg; Paris, Ky.; and Waynesboro and Harrisonburg, Va. The $50,000 portion of Allied’s recent gift designated for Marshall’s College of Fine Arts will support the college’s capital campaign, including renovation of the former Stone and Thomas building in downtown Huntington. The renovated facility will house Marshall’s visual arts and graphic design programs.

MIIR was founded in 2008 to promote economic development and entrepreneurial activity by funding commercially viable bioscience research at Marshall and facilitating partnerships with outside companies.

At Marshall, the West Virginia Research Trust Fund is supporting research in disciplines as diverse as biotechnology, aging and dementia, engineering, chemistry and biology, transportation, obstetrics and gynecology, translational sports medicine, and occupational and environmental health. The program also has helped catalyze public and private support for a number of new research facilities at the university, including an applied engineering complex, translational genomics research institute, sports medicine translational research center, and schools of pharmacy and physical therapy.

For more information about "Bucks for Brains" at Marshall, visit www.marshall.edu/b4b.