Thank you for notifying the Web Team of the issue(s) with this page. We will respond as quickly as possible.
Geology 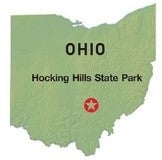 In the photo below, students in the Geomorphology course at Marshall University stop for a quick break in a large sapping recess while hiking Old Man’s Creek gorge at Hocking Hills State. Students visited the area in the Fall of 2019 on a field trip during their Geomorphology course which studies the landscape, its features, history, and the processes which have shaped it. The Hocking Hills Region is a geologically unique part of Ohio known for its cliffs, waterfalls, gorges, and rock shelters. These features are formed in an equally unique unit rock unit, the Black Hand Sandstone. 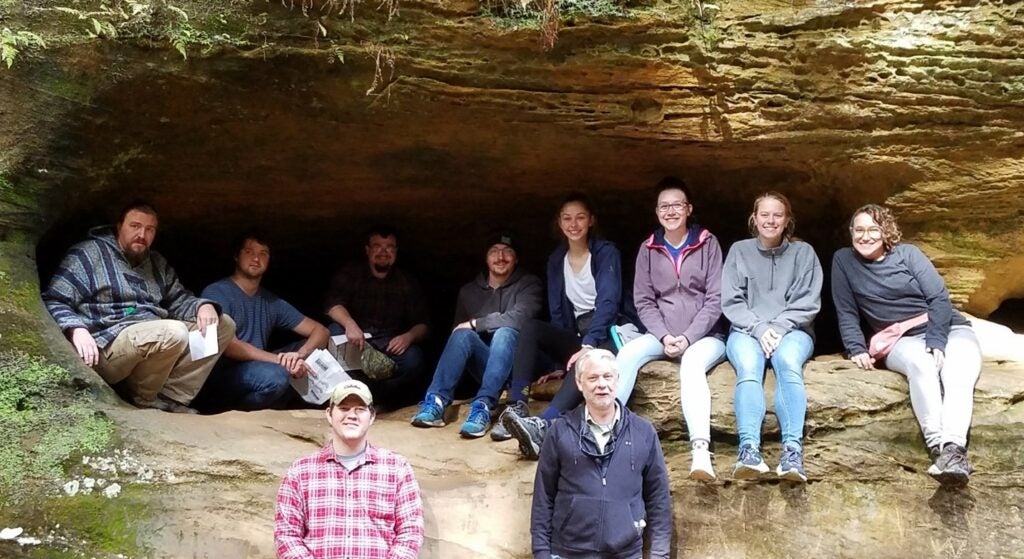 In the state park, Old Man’s Creek gorge cuts through the Black Hand Sandstone. This rock unit dates to the Mississippian (lower Carboniferous) Period of about 340 million years ago. In this region, the Black Hand ranges from 100 to 200 feet in thickness. 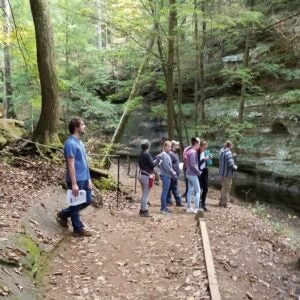 Variations in the extent of cementation defines 3 subunits (upper, middle, and lower) based on weathering resistance. 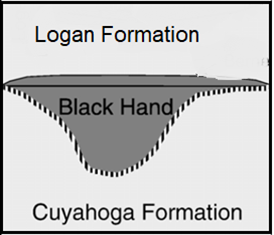 The map shows the areal extent of the Black Hand Sandstone exposure. It comprises an elongate body, oriented N-S, and extending a distance of about 120 miles. Data from oil and gas drilling suggest the rock unit extends southward in the subsurface into West Virginia (Matchen, D.L., 2004). The Black Hand River of the Mississippian (Early Carboniferous) Period extended northward across West Virginia and through Ohio.  Over time, the river migrated laterally across a wide valley gradually filling it with sandy deposits.  In tandem with burial by later deposits, mineral cements precipitated from pore water “glued” sand grains together transforming the loose sand into sandstone bedrock (Matchen, D.L., 2004). 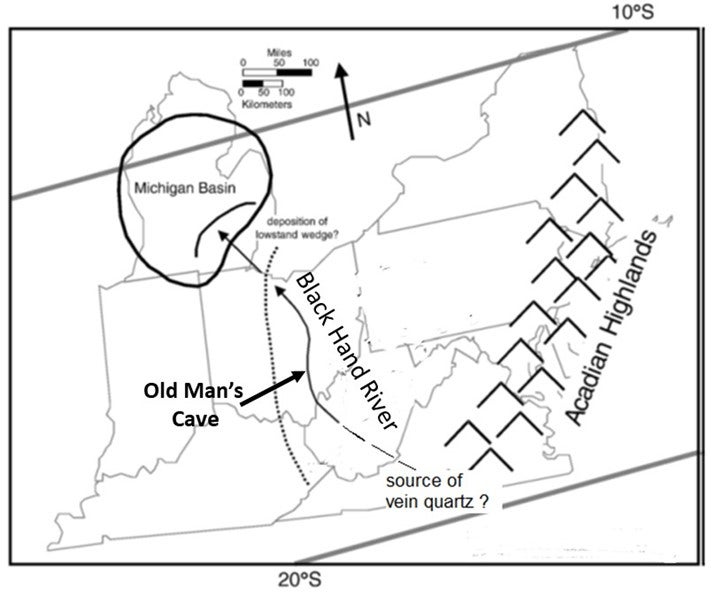 The Black Hand consists of medium- to coarse-grained sandstone with conglomeritic layers containing white quartz pebbles. The pebbles are vein quartz derived from hydrothermal quartz veins in the igneous and metamorphic rocks of the Acadian Highlands, precursor to the Appalachian Mountains (Hansen, M., 1975). 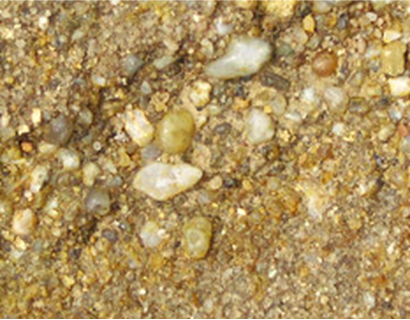 The origin of the Old Man’s Creek gorge has often been described rather simply as the result of a stream-carving along a “northeast-trending master joint” (i.e., fracture).  Such zones of weakness are prevalent in rocks of the Appalachian Plateau. Here fractures parallel the trend of the Appalachian Mountains and are the result of compressional forces that formed the mountains.  However, another, commonly under-appreciated process was fundamentally important in formation of the gorge, “sapping”.

Sapping typically occurs in permeable sandstones associated with perched water tables underlain by an impermeable layer. Limited in its ability to travel vertically downward, water is forced to travel laterally through the sandstone where it eventually seeps out of the ground. Sapping does not require fracturing. Where present however, fracturing can localize groundwater flow paths and thus sapping.

Sapping is a subterranean erosional process that results in the headward migration of channels in response to near constant fluid discharge at a fixed point. The consistent flow of water displaces fine sediments which physically and chemically weathers the permeable rock.

The figure above illustrates the primary steps in formation of a steep-sided gorge like Old Man’s Creek by sapping.  Importantly, in this scenario the gorge formed by lateral retreat of a steep-sided valley in response to groundwater erosion and roof collapse. This differs markedly from the common assumption that stream valleys originate via vertical carving by streams, that is, the valleys are superimposed from above. In contrast, Old Man’s gorge grew laterally by sapping.  Later, stream down-cutting and erosion eventually carved and sculpted the valley floor.

Steep-sided valleys created by sapping are found in many areas such as Utah, Colorado, England, Hawaii, New Zealand, and many other places.  Short, stream-like, deep channels have been observed on Mars. Very similar to valleys created by groundwater sapping on Earth, discovery of Martian valleys has prompted studies aimed at better understanding the process of sapping.

The photo above shows sapping tunnels formed in Navajo Sandstone of Utah. In the photos to the right, note smaller but similar features in walls of upstream area of Old Man’s Creek gorge.

Depositional environments, age, and regional correlation of the Black Hand Sandstone Member of the

Get a Geology Job: