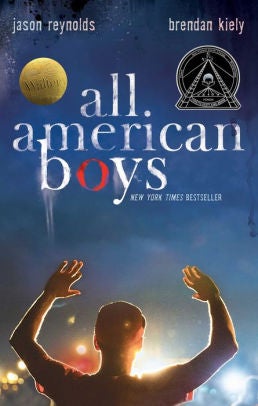 Banned and challenged for profanity, drug use, and alcoholism, and because it was thought to promote anti-police views, contain divisive topics, and be “too much of a sensitive matter right now”

A parent formally challenged this 2016 Coretta Scott King Author Honor book and winner of the Walter Dean Myers Award for Outstanding Children’s Literature for its alleged “anti-police” bias. The book features two teens, one white and one Black, who deal with the racial repercussions of an act of police violence. The Rangeley Lakes (ME) Regional School District reminded the board that the district had a policy to consider challenges. Retained.

Each summer, students in the Sewanhaka (NY) Central High School District are required to read one book from the district’s summer reading list, which is selected by the English chairs in each of the district’s five schools. Some parents objected to All American Boys, in which a police officer beats a Black teen. “The schools should be a neutral place where kids get to be kids, and not a place where we train and brainwash new generations,” said one mom. “I don’t want my son to read a book where, especially now, the police are trashed and blamed for what’s going on.” Others praised the relevance of the book. Its status, including others on the list dealing with the same general topic, is unknown at this writing.

After some parental complaints about the maturity of language and sexual content in some 7th grade reading club selections, a teacher at the Signal Mountain (TN) Middle-High School contacted parents to inform them that she was removing All American Boys and Monster from the reading list. Both books feature protagonists who are Black and address police violence and racial discrimination. While remarking on the value of each title, the teacher encouraged parents to choose other books. In a follow-up statement, the principal indicated that the books were high school reading materials, not 7th grade, and affirmed the school’s commitment to diversity. Also removed from the reading list was My Sister’s Keeper. The 2004 novel follows the story of 13-year-old Anna Fitzgerald, who sues her parents when she discovers she is supposed to donate a kidney to her dying older sister.

Despite being taught in Somerset County Public School in Westover, Maryland, since 2016, All American Boys was challenged by a parent at a board meeting for its “foul and vulgar language” and “divisive topics.” The parent also challenged Ibram X. Kendi and Jason Reynold’s Stamped: Racism, Antiracism, and You. As of November 2020, the district’s reconsideration process was incomplete.

The Fraternal Order of Police chapter in the South Carolina town of Mount Pleasant sought to have All American Boys removed from the Wando High School’s list of optional reading assignments for incoming high school freshmen, along with The Hate U Give by Angie Thomas. The FOP chapter said the books are “almost an indoctrination of distrust of police and we’ve got to put a stop to that.” Both books deal with the issue of police brutality. Following a request for reconsideration process, the school decided to retain both title on the list.