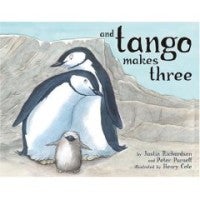 Challenged and labeled because the book features a same-sex relationship.

One of three books about gay couples withdrawn from libraries in Singapore where gay sex is illegal. In a statement, the National Library Board suggested that gayness and family values are incompatible. Copies of the book were to be pulped. It was announced later that authorities in Singapore reversed their decision and stopped the national library from destroying the children’s book after its decision in July produced public outcry over literary censorship. Information Minister Yaacob Ibrahim ordered the books be moved to the adult section, where parents can borrow them for their children. The children’s book was inspired by a real-life story of two male penguins raising a baby chick.

Marked for removal in the Davis (UT) School District because parents might find it objectionable.

Pulled from the Gibbs Elementary School in Rochester (MN) as inappropriate for elementary students and removed from school library shelves. This decision was later reversed as a mistake for failing to follow district policy. Eventually, a “temporary resolution” was reached requiring that one of the parents who challenged the book be present when their child checks out books from the school media center in the future.

Challenged for homosexuality, religious viewpoint, and being unsuited to age group.

Challenged, but retained in the North Kansas City (MO) schools despite a parent’s concern that the book wasn’t age-appropriate, didn’t follow the districts policy on human sexuality education and tries to indoctrinate children about homosexuality. In subsequent discussions, the schools appear to be headed towards segregating elementary school libraries according to “age appropriateness.” Students might be restricted to view or check out materials in their own age-class or younger.

Returned to the general circulation shelves in sixteen Loudoun (VA) elementary school libraries despite a complaint about its subject matter. Withdrawn from two Bristol (England, UK) primary schools following objections from parents. Challenged, but retained at the Eli Pinney Elementary School (Dublin, OH) despite a parent’s concerns that the book “is based on one of those subjects that is best discovered by students in another time or in another place.” Challenged, but retained in the Ankeny (IA) elementary school over the objections of parents concerns of promotion of homosexuality. Retained in the Chico (CA) Unified School District over complaints that the book is inappropriate for elementary school students after the school board determined that the book meets library selection standards and district policy. Retained by the Calvert County Library in Prince Frederick (MD) after requests that the book be removed from the Children’s section and shelved in a labeled alternative section. Retained in the Meadowview Elementary School in Farmington (MN) despite a parent’s concern that “a topic such as sexual preference does not belong in a library where it can be obtained by young elementary students.”

Challenged at the Lodi (CA) Public Library by a resident deriding what she called its “homosexual story line that has been sugarcoated with cute penguins.” Returned to the general circulation shelves in sixteen Loudoun (VA) elementary school libraries despite a complaint about its subject matter.

Moved from the children’s fiction section to children’s nonfiction at two Rolling Hill’s Consolidated Library branches in Savannah and St. Joseph (MO) after parents complained it had homosexual undertones. Pulled from four elementary school libraries in The Charlotte-Mecklenburg (NC) after parents and the Mecklenburg Count Commissioner Bill James questioned the controversial but true story. The books were returned after the local paper questioned the ban.

Moved from the children’s fiction section to children’s nonfiction at two Rolling Hill’s Consolidated Library branches in Savannah and St. Joseph (MO) after parents complained it had homosexual undertones.