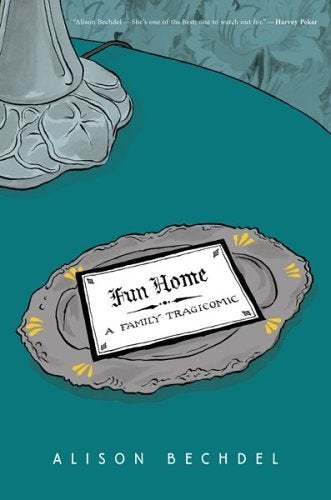 A Moms for Liberty parent complained about this acclaimed and award-winning graphic novel, and said he considers an image inside the graphic novel to be pornographic. The book is not part of the mandatory curriculum and the Troy (MI) School District library copy has a graphic content warning label. One parent went to the school board, the city council, and the Troy Police Department with concerns claiming that the school library was “distributing pornography to minors.” The district’s reconsideration committee, made up of parents, teachers, students, and administrators, recommended that the graphic novel be retained in the library, but students under 18 years of age will be required to obtain parental permission to check it out.

Fun Home was one of five LGBTQIA+ titles challenged by a parent at the North Hunterdon-Voorhees (NJ) Regional High School District. The other titles were Lawn Boy by Jonathan Evison, Gender Queer: A Memoir by Maia Kobabe, This Book Is Gay by Juno Dawson, and All Boys Aren’t Blue by George M. Johnson. The parent read some snippets, called for audits, and threatened criminal charges for those responsible for providing “evil, wicked” content in the school. The school board voted to retain all five challenged LGBTQIA+ titles.

Power2Parent, a self-described parental rights organization, complained about this acclaimed graphic novel, which recounts the author’s coming of age as a lesbian. The group protested the book’s alleged drug use, graphic sexual violence, and anti-religious sentiments and demanded its removal from a Clark County (NV) School District high school. The principal immediately removed the book from the 10th grade honors English class reading list.

Administrators from two New Jersey high schools in the North Hunterdon-Voorhees School District reviewed a single page of this graphic novel that has a lesbian protagonist. Finding the images on a single page of the 233-page book objectionable and in “violation of district policies,” administration restricted the book’s circulation to students with explicit parental permission. Earlier in the year, a new state law had been passed requiring boards of education to include instruction, and adopt instructional materials, that accurately portray political, economic, and social contributions of LGBTQIA+ people. Following a letter from ALA-OIF, the books were restored to open circulation.

At a public meeting, two parents expressed their shock about sexually explicit illustrations in this coming-of-age graphic novel. They asked that the book be removed from the Watchung Hills (NJ) 12th-grade curriculum. After a public hearing in which strong support was voiced for the book, the school board voted to retain the title, but only as one of several alternatives.

Challenged as a recommended, not required, summer reading for incoming freshman at Duke University in Durham (NC) because some students objected to the novel’s “depictions of lesbian
sexuality, arguing that the book is borderline pornographic and they shouldn’t have been asked to read it.” similar criticisms have been levied by opponents at other colleges and universities
that have taught the book, including the College of Charleston – where state lawmakers threatened to defund the summer reading program for featuring it – and the University of Utah. Both
institutions stood by the book, which tells the story of a lesbian coming to terms with her own sexuality as she over time discovers that her distant father is also gay. Challenged, but retained at Crafton Hills College, a community college in Yucaipa (CA) despite a student’s request to remove the book because it was “objectionable.”

Challenged, but retained in the Marshall (MO) Public Library despite being deemed “pornographic” by some members of the community.

Challenged, but retained in the Marshall (MO) Public Library despite being deemed “pornographic” by some members of the community.