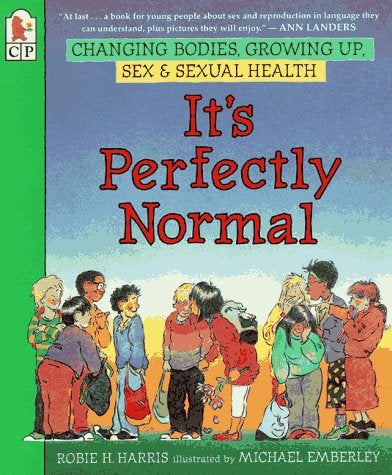 Marshall University does not ban books! The information is provided to let people know what has been banned/challenged elsewhere.</strong

It’s Perfectly Normal has been hailed by parents, educators, psychologists, and doctors for its through and scientifically valid information concerning puberty and sexual topics. Arizona Republican State Rep. Kelly Townsend wrote a Facebook post calling on public school and county libraries to pull copies from their shelves based on the false claim that the book “depicted minors having sexual intercourse.” The Maricopa County (AZ) Library District retained the book, finding it adhered to their collection development policy.

Pulled from the Hudson Park Elementary School library in Rainier (OR). Officials with the Rainier School District noted the title is on the state-approved list of books allowed at the school, but in a letter sent home to parents, the school’s principal stated the books had been inappropriately passed out to fourth graders in the library. “Procedures have been put into place to make sure this doesn’t happen again. All questionable books have been pulled from library shelves,” the principal wrote in the letter.

Challenged as an e-book at the Francis Howell middle school libraries in St. Charles (MO) because of cartoon nudity.

Challenged, but retained at the Lee County (FL) libraries despite the book’s explicit illustrations.

Retained in the Lewiston (ME) Public Library after a patron refused to return a book due to her objections to its content. Other patrons donated four copies of the book which remains in circulation at the library.

A Lewiston (ME) patron refused to return the book to the Lewiston and Auburn public libraries because she was “sufficiently horrified by the illustrations and sexually graphic, amoral, abnormal contents.” A police investigation found the library did not violate the town ordinance against obscenity and the patron will stand trial for theft.

Restricted, but latter, based upon a review committee’s recommendations, returned to general circulation shelves with some limits on student access in the Holt Middle School library in Fayetteville (AR) despite a parent’s complaint that it was sexually explicit.

Challenged, but retained at the Holt Middle School library in Fayetteville (AR) despite a parent’s complaint that it was sexually explicit.

Challenged, but retained, in Montgomery County (TX) library system after the Republican Leadership Council characterized the book as “vulgar” and trying to “minimize or even negate that homosexuality is a problem”.

Restricted in elementary and middle school due to objections of “value statements”.