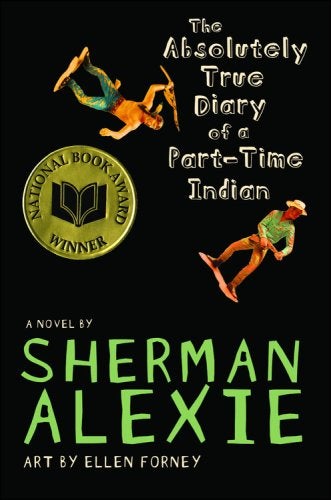 Banned and challenged for profanity, sexual references, and use of a derogatory term.

The Hastings-on-Hudson (NY) School District halted lessons after they received complaints from an African-American student and classmates when an eighth-grade teacher read a passage from The Absolutely True Diary of a Part-Time Indian that included a character’s racist joke featuring the N-word. Defenders of the book, including English teachers and faculty department chairs, students, and the board of the Hasting-on-Hudson Public Library, decried what they called censorship of the book. But the school district administration has said its priority is protecting students, and that schools should be sensitive to the historic marginalization of students of color. A middle school English teacher resigned over the district’s handling of the situation. It is unclear whether letters by students and teachers supporting the book will have any influence on whether the book is allowed to be used in the classroom in the future.

Banned and challenged for profanity, sexual references, and allegations of sexual misconduct by the author.

Retained, but restricted to extracurricular book club use only, this popular YA novel was challenged by parents who objected to its being required reading for ninth-graders at the Midland (MI) Public Schools. The concern was content regarding alcohol, bullying, violence, sexual references, profanity, and slurs. The book did go through a review process, and was allegedly read by all school board members. Right before Banned Book Week, an English teacher at Waverly (KS) High School was suspended for considering teaching this YA novel.

Delayed but ultimately approved in August 2017 for use in the curriculum at the Conejo Valley (CA) Unified School District Board because of board president’s objections to sexuality and profanity in the book. Challenged by several parents in the New London-Spicer (MN) School District who asked for its removal from 8th grade English student’s required reading list because of “gratuitous and unnecessary” profanity and reference to sexual acts. The school board voted 3-2 to retain the book. Challenged but retained at Democracy (NV) Prep where 7th-graders are required to read the book. Parents complained about the language and sexual references in the book and asked administrators to remove the book from the curriculum. The Democracy Prep executive director held firm in support of the book. Retained at Sauk Prairie (WI) Schools after parents raised concerns about teaching the book in 9th-grade classes. Their complaints about the profanity, violence, and sexual references were considered by a review committee. The review committee and superintendent formally recommended to retain the book. The parents appealed the administration’s decision to the school board which voted unanimously to retain the book in the school’s curriculum. Restored to the 10th-grade curriculum at Alton (IL) High School following a review committee meeting. The book had been temporarily pulled from instruction early in October after a single parent objected to its contents. The teacher worked with the parent and the administration to reinstate the book and provide an alternative for concerned parents.

Challenged, but retained in the Brunswick County (NC) schools because, “Appeals to a book the school board has previously ruled on will not be considered for two years.” A grandmother complained that the book “portrays bestiality and is pornographic.” Not disheartened by the decision to retain, she said she achieved her objective with the latest challenge – to inform parents about the book.

Pulled from the Meridian (ID) high school supplemental reading list after some parents complained that the novel “discusses masturbation, contains profanity, and has been viewed as anti-Christian.” School board members rejected a committee recommendation that the book should stay on the 10th grade English supplemental reading list with parental permission required. Challenged at the Cedar Grove Middle School in Wilmington (NC) because “the book contains numerous depictions of sexual behavior, as well as instances of racism, vulgar language, bullying, and violence.” Suspended from the Highland Park, (TX) Independent School District’s approved book list by the school superintendent. The decision sparked a backlash and drew national attention. The superintendent then reinstated the book. In February 2015, the school trustees approved policy changes on how the district selects books and handles parents objections.

Removed as required reading in a Queens (NY) middle school because the book included excerpts on masturbation. Challenged on the 10th grade required reading list at Skyview High School in Billings (MT) because “[t]his book is, shockingly, written by a Native American who reinforces all the negative stereotypes of his people and does it from the crude, obscene, and unfiltered viewpoint of a 9th-grader growing up on the reservation.” Pulled from the Jefferson County (WV) schools because a parent complained about the novel’s graphic nature. Challenged in a Sweet Home (OR) Junior High English class because of concerns about its content, particularly what some parents see as the objectification of women and young girls, and the way alternative lessons were developed and presented. Parents of the 8th-graders in the language arts classes received information summarizing the novel’s most controversial issues before the unit started and had the option of asking for an alternative assignment.

Banned, but later returned to the Richland (WA) school district’s 2011 reading list despite objections to the “coarse themes and language in the young-adult novel.” Pulled from the Dade County (GA) library shelves and the required high school reading list because of complaints about “vulgarity, racism, and anti-Christian content.” Challenged at the Old Rochester Regional Junior High School in Mattapoisett (MA) as an eighth-grade English assignment. Challenged as required reading in at least three freshmen English classes at Westfield (NJ) High School because of “some very sensitive material in the book including excerpts on masturbation amongst other explicit sexual references, encouraging pornography, racism, religious irreverence, and strong language (including the f- and n-words).”

Banned in the Stockton (MO) School District because of violence, Language, and some sexual content. Retained in the Helena (MT) School District despite a parent’s objection that the book contained “obscene, vulgar and pornographic language.”

Retained on the summer reading list at Antioch (IL) High School despite objections from several parents who found its language vulgar and racist. In response to concerns, however, the district will form a committee each March to review future summer reading assignments. The committee, which will include parents, would decide whether parents should be warned if a book contains possibly objectionable material.

Suspended from a Crook County High School classroom in Prineville (OR) after a parent complained it was offensive. The book will remain out of the classroom while
the school district revamps its policies.