The West Virginia Activist Archive is an effort to gather the stories of West Virginians engaged in social change, past and present. We gather activists, individually and in panels, pair them with students and volunteers to record their stories and gather the images and artifacts that provide a broader framework to understand their work and their movement. 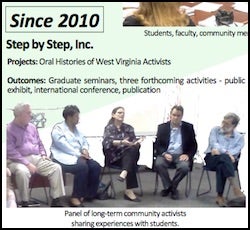 For the past decade Step by Step has hosted a "long haul activist" panel as part of it’s efforts to educate volunteers about the chains of change that have made a difference in the mountains. With Marshall University’s Graduate Humanities Program, we have made digital recordings of those conversations and have worked to archive those recordings in collaboration with our storytellers.  In Spring 2016, for example, the team-taught seminar by Step by Step Director Michael Tierney and Graduate Humanities Program Director Luke Eric Lassiter engages students and local activists in a collaborative project to produce posters and other media on individual activists for a public exhibit (scheduled in April).  Activists are also invited to take part in one of a series of panels on particular themes that the course will sponsor on Wednesday evenings.

See the Gazette-Mail story, “Looking at Activism in West Virginia, Past and Present,” here.

See the Gazette-Mail photos from the exhibit opening, here. 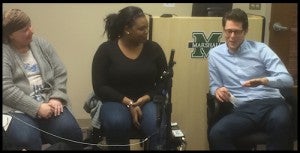 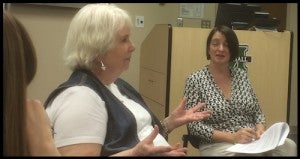 Christine Weiss Daugherty, women’s & rural rights activist – “Advocating for the economic rights of women in West Virginia was an opportunity for growth and change for all of us, and it was also a huge challenge.”

Shelly Gaines, rural activist & girls resiliency programs – “We wanted to create a group to build relationships, connections to give the girls tools to better prepare themselves for life.”

Jim Hatfield, clean & safe water activist – “What is the shared responsibility for the water crisis and how can a similar crisis be avoided in the future?”

Sister Kathleen O’Hagan, Big Laurel School – “I felt inspired by the dream of opening a mountain school and serving the children of southern West Virginia, and that dream motivated me.”

Renate Pore, women’s rights & health care activist  – “I started asking my husband to cook. Eventually that led to a radical break with my old life.” Sister Gretchen Shaffer, Big Laurel School – “I didn’t plan a life educating children in the southern West Virginia mountains, but doing this work and making my home here worked out so wonderfully well.” 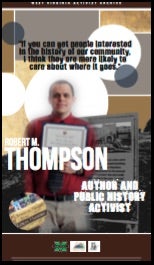 Robert M. Thompson, author and public history activist – “If you can get people interested in the history of our community, I think they are more likely to care about where it goes.”

Rabbi Victor Urecki, interfaith advocate, “It is important to be a champion of interfaith conversations and friendships.”

Reverend Matthew J. Watts, urban community development and Civil Rights – “I always try to encourage these young people to understand that you have been through things that few people your age have gone through, and so you have emotional strength, a stability on the inside of you that is far beyond your years and it will serve you well in the time to come.”

Robin Wilson, peace and environmental activist – “The Peace Movement owes a big debt to the Civil Rights Movement. There were a lot of battles that were like hitting your head against the wall.  Martin Luther King proved that nonviolence can work.”

Our Partnerships, Our Projects