The Water Crisis Oral History began in the months after the January 9, 2014 chemical spill along the Elk River in Charleston, West Virginia, when MCHM (4-methylcyclohexane methanol) made its way into the drinking water of over 300,000 citizens in a nine-county area.  For a brief summary of this release and the ongoing water crisis it started, see here. 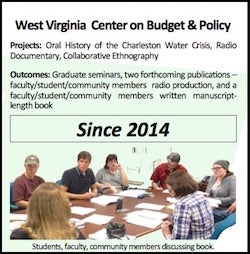 Under the auspices of the Charleston-based Center on Budget and Policy, citizens (several associated with the Graduate Humanities Program) conducted a broad-based oral history of the spill. In direct collaboration with the Graduate Humanities Program, the group began working to both analyze and disseminate the oral history through various media, including via podcasts, a website, and a new book. In the Spring of 2015, the Program collaborated with Laura Harbert Allen and Gabe Schwarzman to begin these  productions via the graduate seminar, “Water Crisis Oral History and Documentary.”  And in the Fall of 2015, we began the process of writing a collaborative ethnography via the graduate seminar, “Writing the Water Crisis.”  Because we worked within a framework of collaborative ethnography, it took time for material preparation and for citizens to review their contributions before actual dissemination of the work could take place.  It is, indeed, a slow process, but very much worth the effort.

In April 2020, I’m Afraid of that Water: A Collaborative Ethnography on a West Virginia Water Crisis was published by West Virginia University Press, here.

From the WVU Press site: 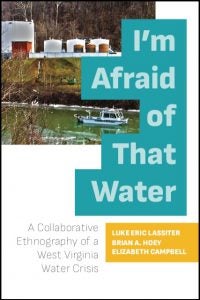 Part I. “I’m Afraid of That Water”: A West Virginia Disaster and Water Crisis

The book also includes several photographs by 2016 MA grad Wesley A. Kuemmel, who, after completing his degree, and with his daughters in college, moved from West Virginia along with wife Caitlin, to a small farm in Ohio.

Interview with Journal for the Anthropology of North America (May 2021)