Old Main, the administration building at Marshall University, stands on a site once known as Maple Grove. A small log building erected there in the early part of the 1800’s was called Mount Hebron Church – used by many denominations.

Marshall traces its origin to 1837 when residents of the community of Guyandotte, then part of Virginia, and the farming region nearby turned their attention to providing better educational facilities for their sons and daughters. According to tradition, they met at the home of local lawyer John Laidley, planned their school, and named it Marshall Academy in honor of a friend of Laidley’s, the late Chief Justice of the United States John Marshall. They chose Maple Grove as the site for their school. It had been the site of a three-month subscription school as well as the church. It remained a subscription school for another term.

On March 30, 1838, the Virginia General Assembly formally incorporated Marshall Academy. Its first full term was in 1838-1839. For decades the fledging school faced serious problems, most of them financial. The Civil War forced it to close for several years, but in 1867 the now West Virginia Legislature renewed the school’s vitality by creating the State Normal School of Marshall College to train teachers. This eased Marshall’s problems somewhat, but it was not until the tenure of President Lawrence J. Corbly, 1896-1915, that the college began its real growth. In 1907, enrollment surpassed 1,000. 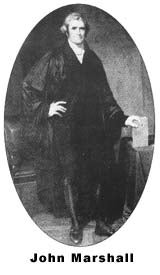 Among the founders of Marshall Academy in 1837 where John Laidley, James Holderby and William Buffington. Laidley served as a prosecuting attorney of Cabell County and as a delegate of the Virginia Legislature. The school named for the late U.S. Supreme Court Justice John Marshall, a close friend of Laidley. The chief justice had died two years earlier. Buffington also was one of the founders of Guyandotte, which existed before Huntington. Holderby had owned a large tract of land, part of which he sold for $40 to the academy’s trustees as the original site of Marshall. 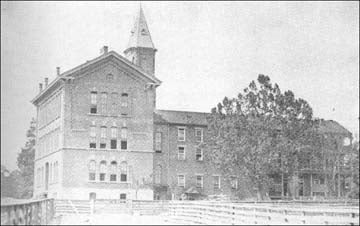 South view of Marshall College State Normal School as it looked in 1885. Old Main, as it is known, and its additions would remain the only buildings until Northcott Hall opened in 1916. Although a school had been at the site since 1837 in one form or the other, the normal school was established in 1867 for the instruction and practice of teachers of the common schools in the art of teaching. 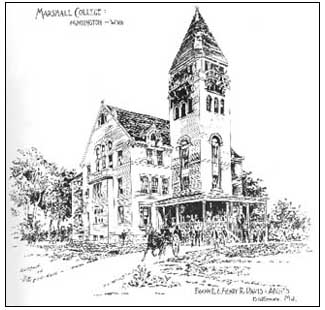 The administration building now known as Old Main actually is five buildings connected over the years. Above, is the architect’s drawing of a proposed addition in 1896. Below is the completed section. This tower later was torn down and the front section now existing was added. Now that the school had been established, it was time to recruit students. The administration used the same process as in more recent times that of a student catalog. These pictures appeared in catalogs at the turn of the 20th Century. 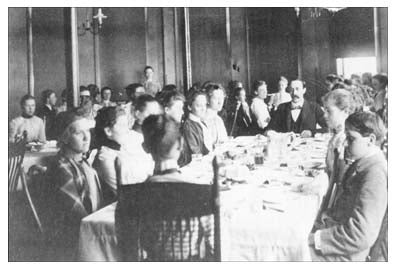 The man who first held the title of president of Marshall, Lawrence J. Corbly, sits at the dining table with students in what today is the east end of Old Main. This is from the 1900-1911 catalog. 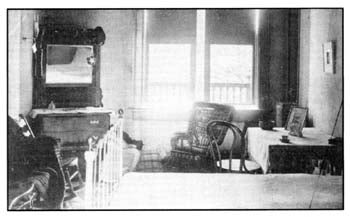 Students stayed on campus just as they do today, but without all of the modern conveniences. This is a photo of a girl’s room. Old Main then served as dining hall, dormitory, gymnasium and classroom as well as an administration building.

It is clear by this drawing how Old Main has changed through the years. The front of the hall to the right served as classrooms and instruction area. The rear section of the token red brick building, seen at the left, served as Ladies Hall and remained a dormitory until the late 1960’s. It was called College Hall in later years. 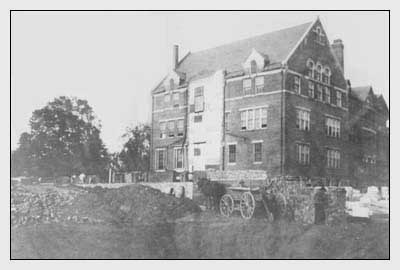 The last section of Old Main was added in 1905. In this picture, you can see where the tower was removed and the foundation laid for the new administration building. 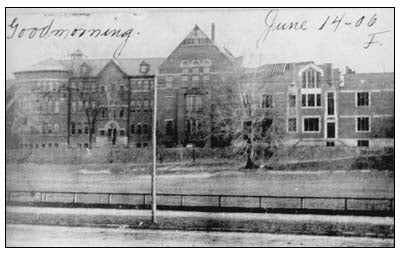 The final section of Old Main is nearing completion when this photo was taken in 1906. In this view from current Third Avenue, the rafters can be seen as the new administration building is joined to an existing section. The Old Main towers that in modern times have become the university’s trade mark, have not been built, but will be a part of this new section. 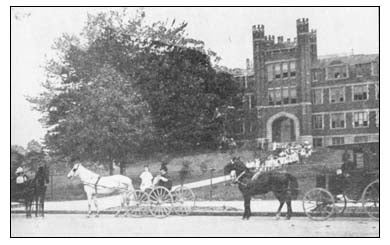 Today, Hal Greer Boulevard is a major thoroughfare for Huntington and in 1908, it was no different. Parents are seen waiting for their children at the model school at then 16th Street entrance to campus. 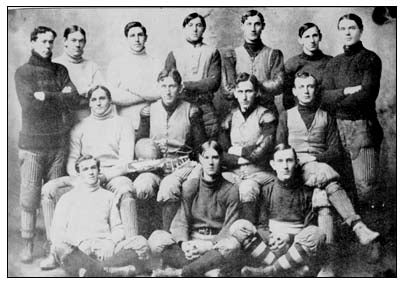 By 1906, athletic teams were becoming a popular pastime. This is a picture of Marshall’s football squad. According to the 1907 student catalog, “We lost not a game.” 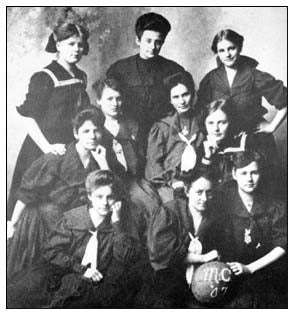 Female students were also getting in the spirit of competition. This is the 1907 girls’ basketball team as seen from the catalog. The uniforms were certainly different than those of today.