Thank you for notifying the Web Team of the issue(s) with this page. We will respond as quickly as possible.
History and Traditions 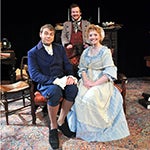 Each September, the Marshall community commemorates the adoption of the U.S. Constitution and the contributions to our nation’s legal system by university namesake John Marshall, fourth chief justice of the U.S. Supreme Court. Constitution Week is sponsored by the John Deaver Drinko Academy and includes an essay competition, quoits tournament, lecture forum and celebration of John Marshall’s birthday. 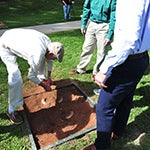 A game similar to horseshoes, quoits was one of John Marshall’s favorite pastimes. Quoits are rings of iron that, like horseshoes, are pitched at stakes. The quoits pits on Buskirk Field are particularly busy during Constitution Week activities. Click here for the rules of quoits. 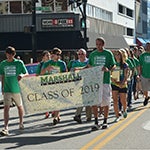 This annual event, held just before classes begin each fall, formally celebrates the incoming class’s official start at Marshall University. After the class picture is taken in front of the John Marshall statue, freshmen walk with the president in a group to the Keith Albee Performing Arts Center via Fourth Ave. The convocation program celebrates the diverse backgrounds of the Marshall family and stories of how the university has changed the lives of its alumni. 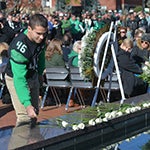 The Student Government Association holds a memorial service each year on the anniversary of the Nov. 14, 1970, plane crash that took the lives of 75 people, including the Marshall University football team, coaches, staff, community members and crew. The ceremony is held in front of the Memorial Fountain on the Memorial Student Center plaza. As is traditional, the water in the fountain is stopped during the service, to remain silent until spring. 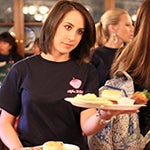 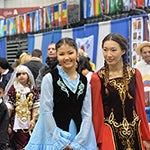 The university’s annual exposition has been held for more than 50 years and features international foods, world music and dance, and displays representing many different countries and cultures. The November festival is free and open to the public. 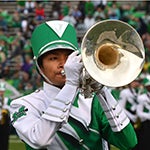 When the 300-member strong Marching Thunder enters the Joan C. Edwards Stadium playing the school’s official fight song, the hearts of sons and daughters of Marshall University swell with pride. The march was written in 1935 by alumnus Ralph A. Williams. 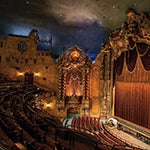 The Marshall Artists Series is one of the nation’s leading college-town arts and entertainment series and the second-oldest, dating to 1936. Housed in the historic Keith Albee Performing Arts Center in downtown Huntington, the series offers a full schedule of performances and films. 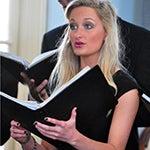 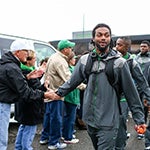 The football team’s pre-game walk through the tailgaters at the Joan C. Edwards Stadium has become a ritual. Fans line both sides of the route to cheer the players and coaches as they make their way to the stadium for each home game. 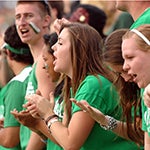 “We Are…Marshall” has been around since football games in the 1980s at the university’s old Fairfield Stadium, where the stadium scoreboard would light up with alternating arrows to indicate which side of the crowd should lead the cheer. Since then, “We Are…Marshall” has become the rallying cry for a resilient school and community.