Skip to main content
Marshall University Arboretum Project
Page may be out of date
This page has not been updated in the last 5 years. The content on this page may be incorrect. If you have any questions please contact the web team. 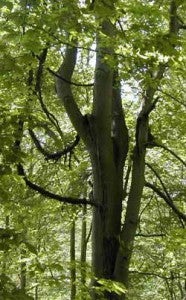 The American Beech is common in eastern North America, and Canada, and can be found as far west as Wisconsin. It is estimated that the Beech tree can live up to 400 hundred years. These trees may grow up to 80 feet tall and have an average maximum trunk diameter of three feet. The American Beech can be found where there is moist soil. It is common to find this tree near streams or creaks, in low land areas, and around protected ravines.  The Beech tree’s root system is shallow and spreads widely among the soil. It also sprouts new seeds from its roots. 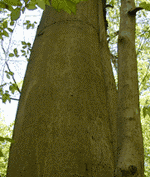 The American Beech leaves are two to six inches long and two inches wide. They have a green color to the top of the leaf and a lighter green color on the bottom of the leaf. The leaves will turn yellow or brown as autumn approaches. They typically fall of during winter, though some may remain attached. The tree will flower in the spring season, where male and female flower sprout. The male flowers are small, yellow, and are clustered together. The female flowers are even smaller with a reddish scales and are found at the end of new twig growth. The American Beech’s pollinated flowers will produce a beechnut, which is eaten by many mammals, like bears, squirrels, birds, and raccoons.

The bark of an American Beech tree is thin, smooth, and light gray in color. The tree will keep its’ smooth bark throughout its mature life, unlike some trees.