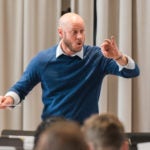 "I am so excited to welcome Chris into the Marshall Band family," Dalton said. "I know his knowledge and vision will continue the great tradition of the Marching Thunder and Marshall University. I look forward to working alongside him to continue to grow the Marshall Band Department."

Schletter is an educator, conductor and clinician who has conducted and performed internationally with the cast of "Blast!" and the American Chamber Winds. He has been a music educator for 17 years teaching high school in South Florida and at the collegiate level while in graduate school. He’s been an active adjudicator and clinician throughout his career and has also provided high school band programs with student leadership training. In addition, he has arranged music for high school and collegiate marching bands in the South Florida area.

Prior to his appointment at Marshall University, Schletter was the interim director of Bands at Marietta College in Ohio. While there, he refined the music education course curriculum, worked to raise the level of music performance in the wind bands, and assisted with recruiting activities, resulting in approximately an 80% increase in music major degree-seeking students.

He is currently finishing his Ph.D. in Music Education with an emphasis in Instrumental Conducting studying with Dr. David Waybright and Dr. William Bauer at the University of Florida in Gainesville, Florida. Prior to his time at UF, Christopher received a Master in Music for Instrumental Conducting under the teachings and guidance of Dr. Kyle Prescott from Florida Atlantic University in Boca Raton.