Caralee Casto, a Marshall University Honors College student, has been named recipient of the Bridging Scholarship for Study Abroad in Japan. Sponsored by a variety of contributors, the awards of $2,500 are administered by the American Association of Teachers of Japanese and are designed to promote study of the Japanese language, literature, and culture. Casto, a junior Japanese major, will spend her upcoming junior year at Kansai Gaidai University in Japan with the Asian Studies program.  Casto plans to pursue a doctorate in Japanese studies after graduation with eventual pl 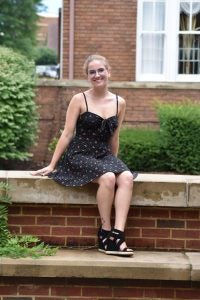 ans to work for the Department of State. In addition to being a student in the Honors College, she is president of Japan Club and a member of the Sado (Tea) Club.

"Being able to study in Japan is something I never would have dreamed of growing up," Casto said. "The Morgan Stanley and Bridging Scholarships have opened the door for me to truly experience my study in the way it was meant to be. These scholarships have shown me that others believe in me, and I hope to be a proud representative of Marshall, West Virginia, and each scholarship program I have been honored with."

In addition to these two scholarships, Casto was also a recipient of the Gilman Scholarship and a Gamestop Scholarship.

How to accept your online invite