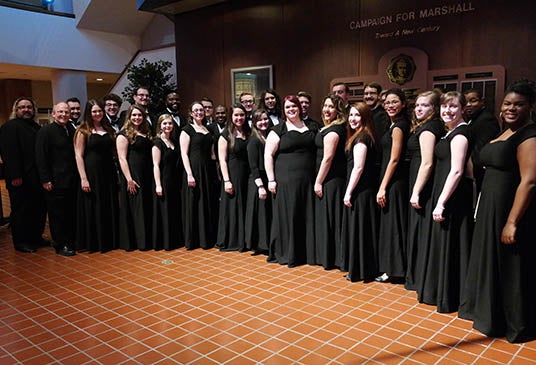 The Marshall University Chamber Choir is a select choral ensemble whose repertoire spans music of the past five centuries, from renaissance madrigals to newly composed works. Although many of the choir’s participants are preparing for careers in music, membership is open to students from the entire campus by audition. Under the direction of Dr. David Castleberry, the ensemble makes frequent spring concert tours, including a ten-day performance  tour to Spain in 2016 and a ten-day performance tour to France in 2012 that featured a performance at Paris’s famed Cathedral de Notre Dame. The group has made frequent appearances at the Piccolo Spoleto Festival in Charleston, South Carolina, and has performed with the West Virginia and Huntington Symphony Orchestras. The Chamber Choir is featured in an award-winning broadcast with West Virginia Public Television entitled Choral Fusion and may be heard through available CD recordings.