Register for the 2023 MU Winter Jazz Festival. All configurations of jazz ensembles are welcome. Let’s make this the biggest and best festival yet! Registration closes on Monday, February 6, 2023

We’re thrilled to host Dr. Jefferson as our guest artist and Joan C. Edwards Distinguished Professor in the Arts for the 54th MU Winter Jazz Festival. You can read all about Joseph here: http://www.josephljefferson.com/ 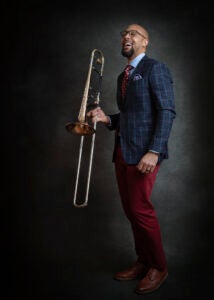 The Thundering Herd All-Star Jazz Ensemble is comprised of some of the most talented young jazz musicians across our region and is by audition only. This year’s band will be led by our outstanding jazz bass faculty member, Prof. Danny Cecil. The THASJE will open our final concert on Saturday, Feb. 18 and will get the opportunity to “sit in” with our guest artist during the concert’s finale. If you have students who are considering a career in music, this is an incredible opportunity for them to experience what playing in a collegiate ensemble is like, but in a safe, positive, and encouraging environment. Even if you do not plan on bringing your band to the festival, please encourage your students to audition. Directions, audition materials, registration, and audition submissions can be accessed here: https://forms.gle/ngVDRDox6DFvpPk38 The Marshall University Winter Jazz Festival is one of the oldest collegiate jazz festivals in North America. Founded in 1969 by Professor J.D. Folsom, the festival is held in February of each year and features performances by various MU Jazz Ensembles, the regions’ finest middle school and high school jazz bands, along with clinics and performances by world-renown jazz artists and educators, as well as members of the MU jazz faculty. High school & middle school jazz ensembles/combos of any size are invited to participate. Each group will receive written feedback, as well as an individual clinic by one of the festival clinicians. School groups will also have the opportunity to work with and witness some of the best professional jazz musicians and educators in the country. Past guest artists include The Count Basie Orchestra, The Stan Kenton Orchestra, Woody Herman and his Thundering Herd, Maynard Ferguson, Clark Terry, Gary Burton, Art Pepper, The DIVA Jazz Orchestra with Sherrie Maracle, The USAF Airmen of Note, Bill Watrous, Paquito D’Rivera, Steve Turre, Jim Snidero, and The Sean Jones Quintet.