The MU Jazz Ensemble I is the premier large jazz ensemble in the Jazz Studies Program. Under the direction of Mr. Jeff Wolfe, this group maintains an extremely active performing schedule throughout the year, including local, regional, and international performances, highlighted by an appearance at the Montreux Jazz Festival. The band explores a variety of large jazz literature including canonic compositions from such luminaries as Duke Ellington, Count Basie, Mary Lou Williams, and Thad Jones, to modern works for the large jazz ensemble by Maria Schneider, Chuck Owen, Geoffrey Keezer, and Earl MacDonald.  Admittance into Jazz Ensemble I is by audition only. 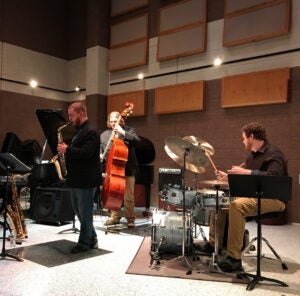 There are four jazz combo in the Jazz Studies program. Coached by various jazz studies faculty members, the combos are primarily student led and emphasize improvisation and the performance of small group jazz literature, as well as original compositions and arrangements. Each combo performs several times per year in the Jomie Jazz Forum, as well as at numerous university functions and community events.