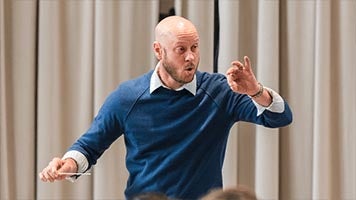 Christopher Schletter is an educator, conductor, and clinician who has conducted and performed internationally, most notably with the original Broadway Cast of Blast! and the American Chamber Winds. He has been a music educator for 18 years teaching at the high school and collegiate levels. He’s been an active adjudicator and clinician throughout his career and has also provided high school band programs with student leadership training. He also has extensive experience arranging music for high school and collegiate marching bands.

Christopher is currently the Director of Athletic Bands and Assistant Professor of Music at Marshall University where he oversees the Marching Thunder, the 6th Man Pep Band, and the Symphonic Band. He also teaches courses in music education. Prior to his appointment at Marshall University, Christopher was the interim Director of Bands at Marietta College in Marietta, Ohio. During his time there, he refined music education course curriculum, raised the level of music performance in the wind bands, and assisted with recruiting activities resulting in more approximately an 60% increase in music major degree seeking students.

Christopher received his Ph.D. in Music Education from the University of Florida in Gainesville. With an emphasis in Instrumental Conducting, he studied with Dr. David Waybright while practicing research in Music Performance Anxiety with Dr. William Bauer. Christopher received his Master in Music degree for Instrumental Conducting from Florida Atlantic University in Boca Raton, Florida under the teachings and guidance of Dr. Kyle Prescott.

Christopher received his Bachelor of Music Education from the University of South Florida in Tampa, after which he performed with the Broadway show Blast! for two years. He traveled and performed with the company in various cities throughout the U.S. and Europe including Boston, Chicago, Detroit, Washington DC, on Broadway in New York, Disney Land in California, as well as London and Zurich. Eventually, Christopher left the cast to pursue his career in music education and was appointed his first position as Director of Bands at Charles W. Flanagan High School. After growing as a director for 3 years Christopher made his move to Cooper City High School where the band program elevated to levels of excellence not yet experienced at Cooper City. During his time at CCHS, the band receiving many awards and recognitions including Florida State Marching Band Class 4A Champions, multiple year recipient of the FBA Otto J. Kraushaur award, and performed at the Band of America/Music for All National Concert Band Festival in Indianapolis.