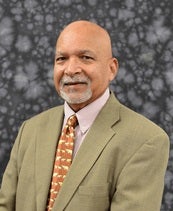 Dr. Uday Tate received his Doctor of Business Administration in Marketing from the University of Tennessee-Knoxville in 1983. Dr. Tate joined Marshall University n 2001. He currently serves as tenured Professor of Marketing in the Department of Marketing, Management Information Systems, and Entrepreneurship. He has developed and taught several Marketing courses at the undergraduate and graduate levels, including International Marketing, Services Marketing, B2B Marketing, Strategic Marketing, and Internet Marketing. In addition, Dr. Tate has conducted extensive research and published several articles in related fields of marketing, including one that received a Best Paper Award in 1999. Dr. Tate has also presented papers and conducted workshops at professional conferences. Dr. Tate has taught in the MBA programs located in Bangalore, India; Guiyang, China; and Bogota, Colombia.

Dr. Tate is also actively involved in community service. He is an active member of Rotary International, He joined the Rotary Club of Huntington in 2005 and served as the president of the Club during 2008-2009. In addition, Dr. Tate served as a member of the Board of Director of Goodwill Industries-KYOWVA for four years and currently serves as a Board member of Unlimited Future, Inc., Huntington, West Virginia. Dr. Tate met his wife, Fabiola, during his conference visit to Bogota, Colombia. They married in Lafayette, Louisiana in 1986.