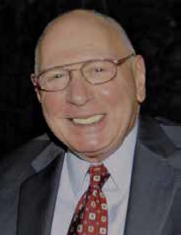 Michael Gerber began his career with Hayflich & Steinberg, CPA’s (now Hayflich CPA’s) in 1961 as an intern while an undergraduate at Marshall University.  He became a full time staff member after graduating with his BBA in Accounting from Marshall in 1963 and became a Certified Public Accountant in 1967.  Three years later in 1970, he became a Partner in the firm.

From 1970 through 2004, he served as the Accounting and Audit Partner and subsequently the Managing Partner. From 2005-2007, he served as Chief Operating Officer.  Although Gerber retired as a partner in 2005, he continued to serve in a consulting capacity through 2009.

Gerber’s hobbies include flying, photography, fishing, hiking, traveling, driving and music.  Mr. Gerber and his wife Elizabeth Daniel Gerber have been married for over 50 years.  He has been a resident of Huntington, WV his entire life with the exception of years 1941-1945.  He is the son of Floyd David and Georgia Wingate Gerber, and has one sister, Lucinda Jane Gerber.

Carol Hartley grew up in the mostly idyllic post war 1950s in the small river town of Ravenswood, West Virginia. A good student in high school and college, she graduated from Ohio University in 1967 in Athens, Ohio, with an A.B. in English. Hartley is proud of her Ohio University legacy, as her great-grandfather graduated from that University in 1876. After Hartley’s graduation, she married, had one daughter and soon divorced. In 1975, at thirty years old and a daughter who had just turned six, she explained that they both would be starting in school, her daughter in first grade at Ceredo-Kenova and Mom in the seventeenth grade at Marshall University. Certain people and institutions are pivotal in life. One such person was the Marshall University Chair of the Management Department, Dr. Bob Alexander. His enthusiasm, optimism, and importantly at that time, his ability to help secure a graduate assistantship and tuition waiver, convinced her to come to Marshall.

Marshall has been a vital institution in Hartley’s life since then. As a non-traditional student, Hartley was able to work during the day and take most of the required classes in the evening. The training, preparation and the encouragement at Marshall have been invaluable both then and now. It was the late seventies and the business workforce, particularly in the financial services industry, was overwhelmingly male. Acquiring the Marshall MBA in 1977 meant more serious and productive interviews. Hartley worked two years as associate marketing director for Kanawha Banking and Trust (now United National Bank). In 1980, at a friend’s urging, she became a stockbroker with what is now Morgan Stanley. In 36 years, many significant challenges and important changes have taken place in the financial services industry.  The widely quoted Dow Jones Industrial Average on December 31, 1980 was 964 and interest rates on checking and savings were 12-13%. Women made up 8-9% of brokers and in some places the ‘boomboom room’ was alive and well. Hartley observes that the 2016 Dow Jones Industrial Average is higher at 17,500 ish, there are now 11% women brokers and the industry ‘culture’ has made enormous strides. Hartley confirms however, that her most important job for twenty-three years was as a single mom and finding the delicate balance between family and work. Her daughter’s hard work, talent and laser focus as Phi Beta Kappa graduate, now a twice-published author, editor and college professor allows Carol to think that perhaps together they might have found that balance, if only occasionally.

In an effort to give back in some small way to Marshall, she has served on the Marshall College of Business Advisory Board beginning in 1992 until the present; she was the first woman president of the Advisory Board from 1998-1999. She has been a speaker for the College’s Executive in Residence Program and a guest lecturer for two years for the Senior Economic Capstone experience. In 2001, Hartley was very honored and gratified to be appointed to the Marshall University Board of Governors. She considers it a privilege to be currently serving as Emeritus Member of the Marshall Foundation Board after her three terms. Over the years, she has found great joy and gratification working with Marshall and all its passionate, dedicated advocates. Marshall did “change lives and inspire extraordinary futures,” hers, among countless others.   She hopes to be a catalyst to help pay those extraordinary futures forward. Coming to Marshall was her Best. Decision. Ever. In 2006, Hartley was invited to join the board of her local, sixteen-county non-profit hospice. With 300 volunteers, 300 staff and 350 patients daily, her association with this organization has been a gift. Its mission reflects dignity at the end of life for our friends, neighbors and our own families. She is privileged to have served this organization for five terms as president. Hartley is happily married to husband Dave Chenoweth and they live in Charleston with their cat Lola. Her daughter Heather, lives in Europe and Carnegie Mellon University Press has just published Heather’s second book. 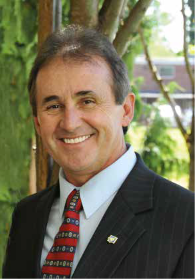 Jeff Hoops is founder, President and CEO of Revelation Energy, LLC, one of the largest independent coal producers in the U.S with over 700 employees and $200 million per year in revenue operating in three states. Hoops began his career in the coal industry at age 17, 42 years ago with Consol Energy, then joined United Coal in Bristol, VA as Corporate Chief Engineer, then relocated to Madison, WV as VP of Operations in 1984. United Coal was acquired by Arch Coal in 1992 and Hoops became VP of Operations for Arch Coal managing operations in Utah, Colorado, Wyoming, Illinois, Virginia, Kentucky and West Virginia until his departure in 1999 to form his own company, Trinity Coal Company that became the largest independent producer in Central Appalachia until acquired by Essar Mineral, a steel company based in India in 2008, which allowed him to form Revelation Energy, LLC.

The Hoops Family Foundation has been involved in many projects around the world, which includes an orphanage in India that provides a home and Christian education to over 2,200 children, also a facility in Dominican Republic that allows over 4,000 young people to do short term mission trips each year. In addition, the Hoops Family Foundation was involved with a 63-unit dorm for students at the Appalachian Bible College in Beckley, WV, an all sport indoor athletic facility at the University of Pikeville, participated in the new basketball practice facility at WVU, the Hoops Family Field Soccer Stadium at the Veterans Complex at Marshall University, and the Hoops Family Children’s Hospital at Cabell Huntington Hospital. Hoops is a former Board Member at Appalachian Bible College, SCORE International, Encounter Revival Ministries, and a member of Mount Vernon Baptist Church in Hurricane, WV where he serves on the Finance Committee.

Hoops has an A.S. in Mining Engineering from Bluefield State College, a B.A. in Economics from Davis & Elkins College, and an Executive MBA from Syracuse University. He resides in Milton, WV with his wife of 42 years Trish and has three sons and four grandchildren. 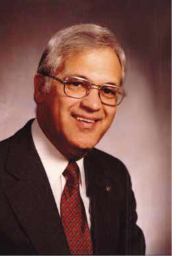 Mr. Charles C. Lanham, the son of Stanton and Westa (Jones) Lanham, was born September 12, 1928 in Kanawha County and later graduated from Ripley High School in 1946. Lanham then went on to serve his country in the United States Army from 1946-1948. Upon his return, he enrolled at Marshall University and graduated in 1952. He also graduated from the West Virginia School of Banking in 1956, the Graduate School of Consumer Banking at the University of Virginia in 1958, Graduate School of Banking at the University of Wisconsin in 1962 and the Senior Bank Officer of Harvard University in 1968.

He served his Alma Mater on numerous high levels for decades. In the mid-1950s, a young Lanham served on the Charter Board of Directors at Marshall

College while he resided in Ripley, WV, and was a Vice President of the First National Bank of Ripley at that time.  He continued to be active for many years with the Alumni Association in Huntington, and later became actively involved with the Mason/Galia/Meigs Chapter located in Point Pleasant.  He nurtured that chapter which provided thousands of dollars for scholarships for the Big Green.  In 1977, Lanham was honored by the Alumni Association with the Alumnus Community Achievement Award.

Lanham served for 12 years on the Marshall University’s President’s Advisory Board, the forerunner to the current Board of Governors. He also served on three presidential search committees. Lanham served for more than 30 years on the Board of Directors of the MU Foundation. For his active and productive work in supporting the MU library, Lanham was honored in 2005 with the John Drinko Distinguished Service Award.  In 2014, Lanham was honored with the Distinguished Service Award at the 77th Annual Alumni Awards Banquet for his career in banking, and his faithful service to his alma mater.

Due in part to Lanham’s efforts, The Mid-Ohio Valley Center, is now owned free and clear by Marshall University.  Lanham served on the Lewis College of Business Advisory Board from 1998 until his death in 2015 totaling seventeen years of service to the business school from which he graduated.

Lanham is cited for his vision and hard work when it came to the development and completion of US  35 through Mason County.  In his honor, Route 35 was named the Fruth/Lanham Highway by former West Virginia Governor Bob Wise and the West Virginia Legislature. In 2004, Lanham was appointed to the WV Senate from the fourth senatorial district, and served on the Senate Committees on Banking and Insurance, Economic Development, Government Organization, and the Judiciary and Labor Pensions Committees. His level of commitment to community service did not go unnoticed or unappreciated.