Dr. Kathy D’Antoni was appointed the assistant state superintendent of schools with the West Virginia Department of Education, Division of Technical and Adult Education in 2010. In 2012, she was appointed the associate state superintendent. She is the former vice chancellor of the West Virginia Council for Community and Technical College Education. In 2019, D’Antoni partnered with the Lewis College of Business and the iCenter to bring innovation and entrepreneurship to the Simulated Workplace programs. The students in the Simulated Workplace will participate in an iCenter pilot program that teaches them how to apply design thinking and the business model canvas to innovate high-impact businesses, which solve grand challenges facing the students’ towns and communities. 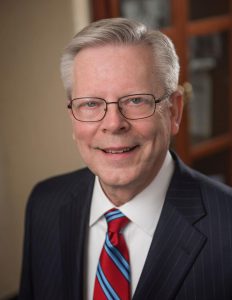 Michael G. Sellards served as the president and CEO of St. Mary’s Medical Center in Huntington for nearly two decades, which was a time of tremendous growth for the hospital. He was also CEO of Pallottine Health System from 2010 through 2019. Sellards played a key leadership role in helping St. Mary’s become part of the Mountain Health Network, which ranks among the largest hospital systems and private employers in the state of West Virginia. Sellards joined the Marshall University Board of Governors in 2008 and served as chairman of the board from 2014 through 2016. Rick Slater, a noted CPA, is a corporate consultant and managing principal of Kaufman Rossin’s Services & Growth. He spent 16 years as a managing partner and member of the management team of a top 20 national firm, and he has 30 years of tax and business consulting experience. Slater has served in strategic advisory capacities for numerous clients involved in mergers and acquisitions, capital structuring, tax restructuring plans, business incentives and grants, public/private development plans, and state and local taxation. He has also worked with many companies in entity selection, raising capital, and research and development spending in the area of health sciences and state taxation. Slater serves on the Marshall University Foundation Board of Trustees and the Lewis College of Business Executive Advisory Board, of which he previously was president.