Chris Cline was born in McDowell County, West Virginia and raised a stone’s throw from the train tracks in Wyoming County. He resided most of his career in Beckley, WV and then North Palm Beach, Florida.

Chris began working in the coal industry in 1980 and he quickly developed a reputation for running low-cost, highly productive operations. He expanded his operations beyond contract mining for larger firms to developing his own operations beginning in 1985. In 1990, he formed the Cline Group to further expand the enterprise by developing loading docks and a coal sales and trading practice, eventually becoming one of the 20 largest coal producers in the United States. In 2006, Chris shifted his attention from Appalachia to the Illinois Basin, founding Foresight Energy and developing some of the largest, most productive mines in the region.

Through the Cline Family Foundation, founded in 2009, Chris made a profound impact on Marshall University and West Virginia University. Among other contributions, the Cline Family Foundation supported Place of Hope, a foster care and adoption organization; Peacehaven Community Farm, a home for disabled adults; orphanages in West Virginia and Haiti; Save the Children; humanitarian aid organizations in Tanzania; churches; and the Raleigh County YMCA, among other organizations, and many needy individuals over the years. He also supported the Benjamin School from which his daughter Kameron graduated in 2015.

Chris passed away on July 4, 2019 and is being honored posthumously.

Thomas J. “TJ” Obrokta Jr. is president and chief executive officer of Encova Insurance, formerly Motorists Insurance Group and BrickStreet Insurance. Encova, a super-regional carrier ranked in the top 20 mutual insurance companies in the United States, provides commercial, auto, home and life insurance, and markets insurance solutions through more than 2,000 independent agencies in 28 states and the District of Columbia. TJ first served as BrickStreet Insurance’s general counsel, senior vice president and secretary when the company launched in 2006. He became its chief operating officer in 2012 and gave up his general counsel position in June 2014 to focus on operations. He was BrickStreet’s president from May 2015 until BrickStreet’s affiliation with Motorists closed in 2017, where he was named president and chief operating officer. The combined company rebranded to become Encova Insurance in July 2019. Before helping to launch BrickStreet, TJ was general counsel of the West Virginia Workers’ Compensation Commission and was part of the team that played a central role in the successful reform of West Virginia’s workers’ compensation system. TJ has nearly 20 years of legal experience in both the public and private sectors. He is a graduate of the West Virginia University College of Law and holds a Bachelor of Arts degree in economics from Columbia University. Robert Simpson’s career in public accounting spanned more than four decades and multiple achievements before he stepped full time into the world of higher education at Marshall University. An accomplished and trusted businessman whose name is synonymous with authenticity, Mr. Simpson now adds exemplary faculty member and successful interim dean to his list of life achievements.

A native of Charleston, West Virginia, Mr. Simpson was educated in the Kanawha County schools and then earned a bachelor’s degree in accounting from Miami University in Ohio and a master’s degree in business from The Ohio State University. Following his formal higher education, Mr. Simpson co-founded a small accounting firm that grew from two people to more than 60 before it merged with a regional accounting group in 2007.

Mr. Simpson’s influence in West Virginia runs deep. To be sure, he is credited with developing scores of highly competent accountants and business leaders across the state, but his true touch has also extended to his community, his church and his family and friends. Described by many as someone with a genuine desire to help others succeed, Mr. Simpson has been focused on the next generation throughout his life. From service on dozens of commerce and community committees to coaching a girls’ basketball team at his church and assisting as a lay leader, Mr. Simpson has affected West Virginia and West Virginians significantly. Mr. Simpson has received several awards from the West Virginia Society of CPAs, including its Outstanding Accounting Educator Award. He received the Who’s Who in West Virginia Business Award in 1997 and in 2012 was inducted in Beta Gamma Sigma, an academic honor society. In 2016, Mr. Simpson was also recognized with Marshall University’s Robert Bruce Hayes Award in Teaching Excellence for the Lewis College of Business.

Mr. Simpson has been developing, mentoring, and educating students and young professionals in the field of accounting and business for decades; is a highly regarded businessman who has tirelessly served his fellow West Virginians through commerce and community organizations. Mr. Simpson stepped into the role of interim dean of the Lewis College of Business and led the school through a rebuilding and reimaging process with a creative mind and a kind heart, sharing his vast knowledge and support to Marshall University on a daily basis. Upon the recommendation of the Faculty Senate, Robert Simpson was conferred the honorary degree of Doctor of Humane Letters at virtual commencement in the Spring of 2020. 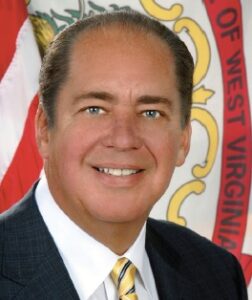 The Honorable Earl Ray Tomblin was sworn in as the 35th Governor of West Virginia on November 13, 2011 and went on to serve two consecutive terms which concluded in January 2017. A self-employed businessman and former school teacher, he was elected to the West Virginia House of Delegates in 1974 at the age of 22 and served in the House of Delegates until he was elected to the West Virginia Senate in 1980. As a senator, he rose to rank of Senate Finance Chairman and became the longest-serving Senate President in the state’s history. In 2000, he was the first to assume the office of Lieutenant Governor upon its creation by the West Virginia Legislature.

Throughout his 42 years in public service, The Honorable Earl Ray Tomblin remained dedicated to creating a better West Virginia for all West Virginians. As governor, he put West Virginians back to work and reduced the tax burden on families and businesses. He worked hard to establish a world-class, seamless education system, streamlining career pathways from vocational education to community colleges to four-year institutions and strengthening the state’s workforce. During his tenure, he secured billions of dollars in economic development projects and thousands of new jobs including Procter & Gamble, Toyota, Macy’s and Gestamp which continue to support West Virginia’s growing economy. He also spearheaded a number of initiatives to keep communities across the Mountain State safe through the expansion of the state’s Medicaid program providing healthcare to thousands of West Virginians and his landmark substance abuse, justice reinvestment and juvenile justice efforts. As a legislator and as governor, he worked tirelessly to promote fiscally responsible approaches to West Virginia government, tackling monumental feats such as workers’ compensation reform, medical malpractice reform, addressed the state’s other post-employment benefits (OPEB) debt and the state’s pension system.

The Honorable Earl Ray Tomblin received his undergraduate degree from West Virginia University and a master’s degree in business administration from Marshall University and is the first son of Marshall to serve as the state’s governor. He and his wife Joanne Jaeger Tomblin (BA ’75; MA ’78) have one son, Brent (BBA ’12; MA ’14) and daughter-in-law Brittany (BBA ’12; MA ’14).

Dr. Jerome A. “Jerry” Gilbert served as the 37th president of Marshall University, having assumed the position in January of 2016. His goals for Marshall have included increasing student success, expanding the research enterprise, enhancing community and economic development activities, and making the campus more inclusive and diverse. Prior to Marshall, he served 27 years at Mississippi State University including his last role as provost and executive vice president. Prior appointments include faculty positions at North Carolina State University and the University of North Carolina.

Dr. Gilbert’s research expertise was in orthopedic biomechanics, and he is a Fellow in the American Institute for Medical and Biological Engineering (2007) and the Institute of Biological Engineering (2008). While in Huntington, he has been active in the Huntington Regional Chamber of Commerce, the Huntington Area Development Council, and the neighborhood civic organization the Fairfield Alliance. Dr. Gilbert is a member of the Peer Corps reviewers for the Higher Learning Commission and has been active in the higher education accreditation process. He and his wife Leigh have three children and two grandchildren.